At last, Georges Bensoussan's groundbreaking book: Juifs en pays arabes: le grand deracinement is available in an English translation by Andrew Halper. Here is a review by Aaron Howard in Jewish Herald Voice, a newspaper published in the Houston area.

The history of Mizrahi Jews is largely silent, writes French Jewish historian Georges Bensoussan. One reason is that most Jewish historians take a Eurocentric view of history; Jewish history is the narrative of Ashkenazi Judaism. Second is that Anglo-American Jewry is overwhelmingly Ashkenazic. In contrast, about 60 percent of French Jewry is from North Africa and the Middle East.

Third is Arab archives are, for the most part, closed or not accessible unless the historian in fluent in Arabic. 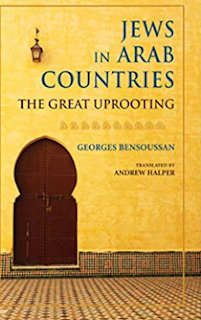 Bensoussan is the author of “Jews In Arab Countries” (Indiana University Press). Originally published in France as “Juifs en Pays Arabes, le Grande Racincement 1850-1975,” the book is now available in an English translation.

Much of the author’s source material comes from the archives of the Alliance Israélite Universelle. As the most important Jewish philanthropic organization of its day, the AIU first tasked emissaries to examine the state of the Jewish population and report on their needs. The AIU also established a comprehensive educational system in North Africa and parts of the Middle East.

The narrative begins in the middle of the 19th century when Western nations began colonizing the Arab world. Granted, AIU agents carried certain prejudices with them. Yet, in location after location, agent after agent recorded a Jewish population marked by fear and submission to the point of “internalizing the idea that he was the natural inferior of the Arabs.”

What emerges from these accounts, writes Bensoussan, “is the sense that humiliation had become so all-encompassing, so omnipresent, that words failed to express it.” Jews lived in the context of being a minority in an Islamic world, where tolerance was not a recognized value.

But, there’s a deeper level of subjugation going on. Islam is fundamentally a religion of submission. Man submits to G-d’s authority. The ruled submits to the ruler. Women submit to men and so on in a highly hierarchical society. Freed slaves and dhimmis (Jews and other People of the Book) were next to the bottom rung, a status of inferiority.

The general picture of Mizrahi Jewry, just prior to European colonization, with a few exceptions, is one of extreme poverty, filth, alcoholism (Jews distilled and consumed their own anisette), disease, ignorance and “diffused violence” suffered at the hands of local rulers and the general Muslim population, who had barely a leg up on the Jews.

More about Georges Bensoussan
Posted by bataween at Wednesday, September 04, 2019