'As a Sephardi woman, I felt seen by the world'

TV critic of Syrian extraction Linda Maleh was ready to be disappointed by Netflix's news series 'The Spy'. But she needn't have worried - the show, which focused on the Egyptian-born Israeli spy Eli Cohen, introduced the mainstream viewing public to  'Sephardi culture', she writes in Alma. 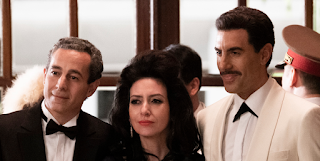 A scene from the Netlix TV series 'The Spy'

The second I had a moment last Friday, I raced to my computer to watch Netflix’s new limited series,  Let me back up. The Spy  is about Eli Cohen (played brilliantly by Sacha Baron Cohen), Israel’s most famous spy that infiltrated Syria in the ‘60s and was eventually caught and executed by the Syrian government. (I’m not spoiling anything. Besides for the fact that this is decades old history, it’s also revealed within the first few minutes of the show.)

Why do I feel a personal connection to Eli Cohen? Because my ancestors, like his parents — Eli grew up in Egypt — were Jews from Aleppo, Syria. We have the same heritage.

What does this mean for my experience watching a show about him? Everything.Being from the Middle East means that Eli was a Sephardi Jew, and so the show, so grounded in portraying Eli’s family, has Sephardi culture on display. There aren’t a lot of Jewish characters on television. This may be surprising, considering Hollywood is full of Jewish filmmakers, but it’s true. And when there is a Jewish character, they’re often only Jewish in name, not in practice. When Jewish characters are actually made to be Jewish in practice, however, they rely on cliches. There are ultra-religious Jews with their “backwards ways” on display (especially in procedurals, like doctor or detective shows, or the infamous film,