With thanks: Lily, Michelle


By now, everyone has heard that  the two Democratic Congresswomen Tlaib and Omar were banned from visiting Israel on account of their support for the Boycott, Divestment and Sanctions movement. The debate has been raging in the press and media  - should they have been let in? Should they have not? - and was the subject of a recent discussion on  TV host Bill Maher's popular HBO talkshow.

While the panellists lamented the ahistorical nature of the discussion, Bill Maher wades in at 2:30 minutes in with a point not often heard on mainstream TV: Saudi Arabia won't let Jews in, and the Jewish population of Morocco, Iraq, Tunisia, Egypt and Iran has declined dramatically. Maher cited figures which today are out of date (see table below), but the point was well made. ' It's not a one-way street," he said. 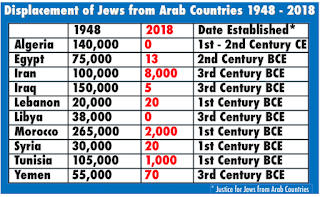 Hillel Neuer at the UN Human Rights Council: Algeria, Where are your Jews?
Posted by bataween at Tuesday, August 20, 2019