Spain throws up hurdles to citizenship for Sephardim

As the deadline approaches,  Sephardi Jews applying for Spanish citizenship have been frustrated by bureaucratic hurdles and exams to demonstrate linguistic and historical knowledge. Fewer than 10,000 Jews are supposed to have been successful, Soeren Kern argues in The Gatestone Institute. The process to apply for Portuguese citizenship is much easier:

A piece of much-heralded legislation to grant Spanish citizenship to up to 3.5 million descendants of Jews expelled from the country in 1492 is about to end in failure: fewer than 10,000 Jews have been awarded Spanish passports ahead of an October 1, 2019 deadline.

Spanish leaders promised that the law — which entered into force on October 1, 2015 for a period of three years and was extended for one additional year — would “right a historic wrong” and demonstrate that more than 500 years after the Inquisition began, Jews are once again welcome in Spain. The legislation, however, introduced so many cumbersome bureaucratic hurdles to obtain Spanish citizenship that most prospective hopefuls appear to have been deterred from even initiating the application process.

Also known as the “Right of Return” for Sephardic Jews (Sepharad means “Spain” in Hebrew), the law purported to grant Spanish citizenship to anyone able to meet two seemingly straightforward requirements: prove Sephardic heritage and demonstrate a “special connection” to Spain. In practice, however, the process has been far more complicated.

The legislation’s main barriers to Spanish citizenship have been obligatory exams on Spanish language and socio-cultural history, the need to travel to Spain and exorbitant fees and costs. Although prospective applicants do not need to be practicing Jews, they must prove their Sephardic background through a combination of factors, including ancestry, surnames and spoken language (either Ladino, a Jewish language that evolved from medieval Spanish, or Haketia, a mixture of Hebrew, Spanish and Judeo-Moroccan Arabic). According to the law, even if applicants speak Ladino or Haketia — essentially dying languages that are spoken mostly by the elderly in some parts of Latin America, Morocco and Turkey — they are still required to pass a Spanish-language proficiency exam. 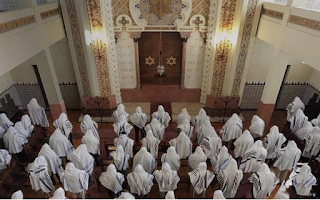 Congregants at the synagogue in Porto, Portugal

In an interview with the Spanish newspaper El País, the director of the Sephardic Center in Istanbul, Karen Gerson Şarhon, noted the paradox that even though Sephardic Jews have preserved Ladino or Haketia for hundreds of years, proficiency in those languages in and of itself does not qualify them for Spanish citizenship. “A Sephardic Jew who speaks Ladino perfectly understands spoken Spanish,” she said, “but fails the exam because the differences in the written and the oral are very great.”

Email ThisBlogThis!Share to TwitterShare to FacebookShare to Pinterest
Labels: Jews of Portugal, Jews of Spain