Agreement with Algeria will 'legalise theft of Jewish heritage'


A Memorandum of Understanding signed earlier this week by the US State Department with Algeria is causing consternation among organisations representing Jews from the Middle East and North Africa. They argue that it is simply an instrument for legitimising the seizure of Jewish heritage in that country.

The cultural property agreement negotiated by the State Department under the U.S. law implements the 1970 Convention on the Means of Prohibiting and Preventing the Illicit Import, Export and Transfer of Ownership of Cultural Property.

The United States has similar bilateral agreements with 19 countries around the world, and has imposed emergency import restrictions on cultural property from Iraq and Syria as well.

The primary aim of the agreement is to place U.S. import restrictions on categories of Algerian archaeological material dating from 2.4 million years ago to approximately 1750 A.D., including some of the earliest human remains found at Ain Boucherit and cultural objects from many of Algeria’s World Heritage sites, including the spectacular Roman ruins of Tipasa, Timgad, and Djémila. 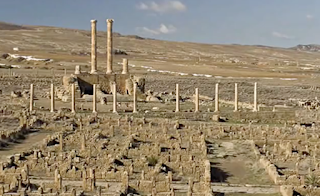 The new MOU is intended to protect the prehistoric sites and Roman sruins at Tipasa, Timgad and Djemila (above) from looting.

In the past JIMENA, the US organisation representing Jews from the MENA, has clearly stated its objections to such MOUs: "These MOUs claim to be about looting, but their broad scope and limited evidence of success suggests their real impact is providing a legal vehicle to legitimize foreign confiscations and wrongful ownership claims. Legitimate efforts to curb looting are essential, but they must be targeted to preserve archaeological resources, and not to disguise the brazen property confiscations of tyrants."

The Jewish community of Algeria, once numbering 130,000, no longer exists. Synagogues, cemeteries, sifre torah and other Judaica were abandoned at the time of the great exodus of 1962, when Algeria acquired its independence.

In April 2019,Rep. Lee Zeldin (R, NY-1) introduced the Protecting US Heritage Abroad Act. With North African Jews in mind who are now US citizens, the bipartisan legislation, cosponsored by Rep. Michael McCaul (R, TX-10) and Rep. Debbie Wasserman-Schultz (D, FL-23) would extend the current mandate of the US Commission for the Preservation of America’s Heritage Abroad to include the Middle East and North Africa, and would provide access to protected cemeteries, monuments and buildings.

More about the campaign against MOUs
Posted by bataween at Friday, August 23, 2019