Condemned for antisemitism, the British Labour Party has tried to show that it is resolving the problem. But it has failed to acknowledge the history of antisemitism in the Mediterranean and the Middle East and tries to project Zionism as a purely European reaction.     Its attempt to encompass both Zionists and anti-Zionists in the party's ' big tent' will also fail,  as the Zionists are viewed as a 'foreign' group  disloyal to Jeremy Corbyn. Scathing piece by Andrew Apostolou in Jewish News: (with thanks: Lily) 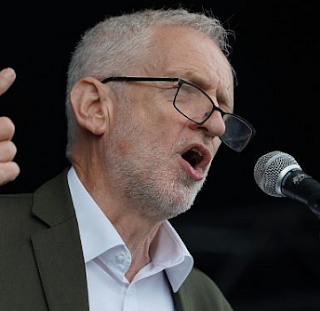 
The Labour Party’s most recent attempt to resolve its antisemitism problem has been a failure.

On 21 July, the party released “No Place For Antisemitism” and a microsite to “provide Labour members and supporters with some basic tools to understand antisemitism so that we can defeat it.” The leaflet accepts the seriousness of Labour antisemitism. Unfortunately, it also promotes a flawed history that will allow antisemites to claim that Zionism and the creation of Israel are illegitimate western European guilt trips.

This will validate, rather than refute, the anti-Zionism that antisemities use to harass Jews in the Labour party. The leaflet gives the false impression that antisemitism is largely a western European phenomenon and Zionism is the Jewish reaction. Readers are told, for example, that the Holocaust was the murder of “six million Jews, two-thirds of the Jewish population of Europe.” This is a common mistake. Far from being limited to Europe, the Nazis' German Death squads sought moutain Jews in the North Caucasus. German's Vichy allies imposed discrimination against Jews in North Africa. In 1942 the Germans had a special unit ready to start the slaughter  of Jews in the Middle East were Rommel to prevail in the Western Desert.

The West European focus of “No Place For Antisemitism” means that it excludes the important history of antisemitism in the Mediterranean and Middle East. The leaflet’s potted history includes the expulsions and massacres of Jews during the Crusades from “Germany, England, France and Austria.” What that misses is important events such as the forced conversion of Jews in Iran (17th century), the blood libels in Damascus (1840), Corfu (1891), Shiraz (1910), the pogroms in Greece (1931), Turkey (1934), Iraq (1941), Egypt (1945) and Libya (1945 and 1948).

The closest this pamphlet comes to acknowledging the experience of Middle Eastern Jews is a passing reference to “discrimination after the founding of the State of Israel.”

These errors allow the Labour leaflet to describe Zionism as a “response to 19th Century European antisemitism.” This is also faulty. The first wave of modern Zionist thought began with Rabbi Yehuda Alkalai in the Ottoman Empire. It was the Damascus blood libel that convinced Alkalai that the Jews needed to control their own fate. Read article in full
Posted by bataween at Monday, July 29, 2019