The Ottoman expulsion could have been worse

The story of how the Ottomans expelled thousands of inhabitants of Tel-Aviv-Yafo in 1917 is one Israel would rather forget. Nadav Shragai of Haaretz reports in an article first published in April 2007: 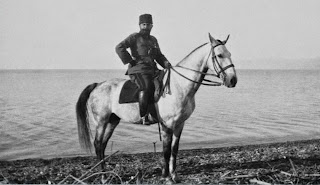 
"In a section on the outskirts of the Yavne'el cemetery lie dispersed dozens of basalt tombstones, without names. Only one is engraved with a few clear lines, recounting a terrible tale that nearly disappeared into oblivion: "In memory of my dear parents, Yaakov and Creina Klein (Keter) aged 35-38 and my brother Yehoshua Yona (z"l) aged 5, among the deportees from Tel Aviv-Jaffa, in World War I 1917, who lie interred in this section and whose place of burial is unknown."

"The year 1917 was difficult for the Jews in pre-state Israel. The British army, pushing northward from Egypt, had conquered the southern part of the Land of Israel, and the Turks were waging fierce rearguard battles. The Turks were afraid Jews would help the British conquer the northern part as well. On March 28, 1917, the Ottoman military governor, Jamal Pasha, ordered the expulsion of Tel Aviv-Jaffa's residents. On Pesach eve, April 6, 1917, the first Hebrew city emptied out. Among the thousands expelled was author Yosef Haim Brenner, who was inspired by those days to write the short story "Hamotza" (The Way Out).

"Dr. Gur Alroey, who chairs the Land of Israel Studies Department at the University of Haifa, says there was nothing heroic about that expulsion. "It's almost impossible to grasp today," he said. "Thousands simply got up and left, without resisting, and maybe that is why nobody likes to remember or recall that expulsion."

"They scattered to Tiberias, Safed, Kfar Sava, Petah Tikva, Zichron Yaakov, Jerusalem. Some 2,500 of them, mainly the poor, wandered as far as the northern moshavim, or small farming communities. They had to contend with the climate, hunger, poverty and typhus. They survived the first few months, but in the winter of 1917-18, hundreds died of exposure, disease and hunger. Most of the dead were buried hastily, in unmarked graves around the country.

"Their descendants have been trying for years to persuade the Tel Aviv Municipality to commemorate those who died in the expulsion, or as a result of it, but to no avail."

Indeed, it could have been much worse as Djamal Pasha had a similar fate in mind for the Jews in the area as was done in the Armenian, Assyrian and Greek Genocides only to be prevented by Germans such as General Erich von Falkenhayn (who himself apparently disliked Jews) and others.

Jester sounds like he knows about the new book by Benny Morris and Dror Ze'ev called something like The Thirty Year Genocide, about the expulsion and slaughter of the Pontic Greeks [those living around the Black Sea], Armenians and Assyrians. I knew an Assyrian fellow from northern Iraq in grad school. He spoke Aramaic and was studying Aramaic lit on the grad school level.

It is good that Morris and Ze'evi deal with the Pontic Greek and Assyrian genocides since they are little known compared to the Armenian genocide.


The Armenian massacres were notorious in Allied countries [the Entente powers, UK, France, etc]. Jews in those countries as well as in Germany and the USA, not yet in the war, were concerned over a possible Ottoman massacre of Jews in the Empire and especially in Israel which had a sizable Jewish population of 80,000 in 1914 at the start of the war. Luminaries such as Max Nordau and Prof A S Yahuda corresponded with influential American Jews to urge them to protect the Jews in Israel through pressure on the Germans, the ally of the Ottoman Empire in WW One.
http://ziontruth.blogspot.com/2006/12/professor-bigers-turkophilic-fantasies.html

Aaron Aaronsohn and the NILI group shared the fear of undergoing the suffering of the Armenians.
http://ziontruth.blogspot.com/2008/07/armenian-genocide-german-role-in-it-as.html

Some Jews received the fate of the Armenians during the Armenian genocide. See link:
http://ziontruth.blogspot.com/2008/07/jews-caught-up-in-armenian-genocide.html

Have yet to read the upcoming book, just discovered pieces of info about the various Turkish perpetuated genocides over the years along with Jews in pre-state Israel managing to escape a similar fate.

Honestly did not know about some Jews unfortunately receiving the same fate as the Armenians yet at the same time am not surprised, it certainly changes things given how the Turks like to blame the Jews via the Dönmeh for the atrocities they themselves committed along with strangely Armenians / Assyrians / Greeks blaming the Jews as well (again unsurprising given a number appear to still be marinated in Replacement Theology/Blood Libel-based Jew-hatred as opposed to directing that hatred towards their Turkish oppressors / occupiers - Which probably explains why the Turks used Jews largely expelled from Iberia as tax collectors / etc while the Turks consolidated their hold over Christian territories they conquered).

Are there anymore instances of Jews getting caught up in the Armenian / Assyrian / Greek genocides? Since consolidating them would serve as very useful in debunking both sides(for their own reasons) seeking to blame Jews for what happened.

It is interesting to note Alec Issigonis - the designer of the Mini and Morris Minor was also almost caught up in the great fire of Smyrna prior to being evacuated to Malta by British Royal Marines in September 1922.