The Mufti's war against the Jews

This month marks the 45th anniversary of the death of Amin al-Husseini, the one-time Grand Mufti of Jerusalem — and a Nazi collaborator. Hailed as a “pioneer” by current Palestinian Authority leader Mahmoud Abbas, during World War II al-Husseini raised SS regiments in the Balkans, promoted the Reich’s propaganda in the Arab world, toured death camps, and plotted the genocide of Middle Eastern Jewry. Sean Durns writes in JNS News: 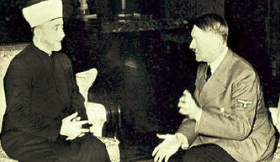 Declassified CIA documents — many revealed for the first time — and a recent book tell a different story, one in which al-Husseini continued to be influential more than a quarter-century after the war’s end. Although he would never regain the power that he once wielded, the Mufti remained a force to be reckoned with. Intelligence agencies closely monitored him, and Arab regimes variously sought his support or his assassination.

Through it all, he remained not only an unapologetic antisemite, but also an inveterate schemer. The Mufti’s rise to power was itself owed to intrigues. The British, who ruled Mandatory Palestine after the collapse of the Ottoman Empire, appointed al-Husseini the Grand Mufti of Jerusalem in 1921, making him both the country’s highest Muslim cleric and leading Arab political figure.

As Wolfgang Schwanitz and the late Barry Rubin revealed in their 2014 book Nazis, Islamists and the Making of the Modern Middle East, the 24-year-old with no religious training was likely chosen in recognition of his service as a spy for the British in the final years of World War I. The decision, the historians conclude, “was one of the most remarkable errors of judgment ever made in a region rife with them.”

Indeed, al-Husseini would spend the next two decades inciting anti-Jewish violence and refusing numerous British-led attempts to broker peace. By the 1930s, the Mufti was actively seeking — and receiving — support from fascist Italy and Nazi Germany. US intelligence would later conclude that the 1936-39 Arab Revolt, in which Palestinians led by al-Husseini murdered rivals, Jews, and British officials, “was able to continue only because of Nazi funding.”

In October 1937, the now ex-Mufti fled to Lebanon, but not before he released an “Appeal to All Muslims of the World,” in which he “urged them to cleanse their lands of the Jews … and laid the foundation for the antisemitic arguments used by radical Arab nationalists and Islamists down to this day,” note Schwanitz and Rubin. He would eventually make his way to Berlin, where he would aid the Axis powers, befriend high-ranking Nazi officials like Heinrich Himmler, Adolf Eichmann and, in a November 28, 1941,  Adolf Hitler, ask for “a free hand to eradicate every last Jew from Palestine and the Arab world.”


Read article in full
Posted by bataween at Saturday, July 27, 2019