Is Hen Mazzig a bad or true progressive?

The Israeli son of Iraqi and Tunisian Jews, Hen Mazzig is a most energetic advocate for Jewish refugees from the Middle East and an articulate champion of truth and balance in the portrayal of the Israel-Palestine conflict.

In this 45-minute podcast interview with Jonny Gould (see links below), Mazzig emphasises that all Jews are indigenous to the Middle East, having originated in Judea. The interview ranges widely, from Hen's narrow escape from a suicide-bombing, to his period in the IDF liasing with Palestinians as a member of COGAT, to his 'coming out' as a gay soldier.

Hen's background and homosexuality puts him at loggerheads with 'progressives' in the West who brand all Jews as 'white colonialists' and even exclude Jewish gays from their parades. Hen Mazzig has not ruled out an eventual career in politics and it is there he might make his most effective contribution. 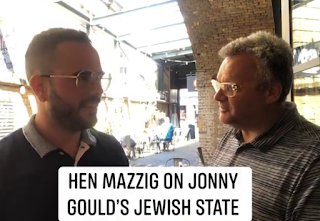 More about Hen Mazzig
Posted by bataween at Thursday, July 11, 2019