Iranian Jews, struggling to prove they are patriots

For two years, Hasan Sarbakhian was forbidden by the Iranian authorities from having his photos documenting the lives of Jews in Iran being seen or published. This Jerusalem Post by Zvi Joffre give background information to Sarbakhian's project, quoting from an article by Larry Cohler Esses, the first reporter from a Jewish medium (The Forward)  to be granted a visa to visit Iran. However,  Iran-born journalist Karmel Melamed warns that the regime controls tightly what foreign journalists see and hear (see his comment below). (With thanks: Lily)

"During my interrogation sessions, I was asked why I have decided to concentrate on the lives of Jewish citizens and why not Shiite Muslims," said Sarbakhshian. "My answer was that all the Iranian media are at the disposal of Shiite Muslim. These are the minorities who have no platforms.

Sarbakhshian tried again ten years later when he was living in exile, and decided to focus on Iranian Jews who had fled to Israel. "In Israel, my concentration was on the concept of Motherland. To understand where these Israelis of Iranian descent perceived as their motherland. The photojournalist asked the same question of Jews in Iran. He showed a picture of an Iranian Jewish doctor with a baby he had just helped deliver. "It really doesn't matter if the baby is born Muslim or Jewish or whatever, he only has done his job." 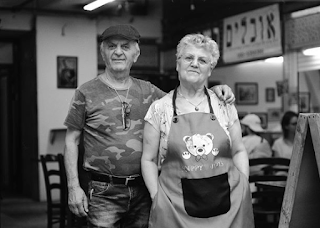 Another example he presented was an Iranian Jew accused of spying for Israel who was jailed for several years. The first thing he did when he was released was to visit the grave of an Iranian Jewish soldier who was killed in the Iran-Iraq War defending Iran.

Sarbakhshian stressed that in Iran, the Jews constantly struggle to prove that they are patriots.

There are an estimated 15,000 Jews still in the Islamic Republic, according to a 2018 report by JTA reporter Larry Cohler-Esses in the same year said that the Iranian census counted 9,000 Jews in the country.

A 2015 report in the Forward by Cohler-Esses described Iranian Jews as "well-protected second-class citizens." Cohler-Esses was the first reporter from a Jewish, pro-Israel publication to be granted a journalist's visa to Iran since the revolution in 1979.
Iranian Jews won't hesitate to walk the streets of Tehran with yarmulkes on, but under Iran's sharia law code, Jews and other non-Muslims are penalized differently than Muslims with some violations, usually in a way that is not favorable to the non-Muslims. Tehran's five Jewish schools are also run by a Muslim principal, which the head of the Jewish community condemned as "insulting," according to the JTA report by Cohler-Esses.
After years of lobbying by the Jewish community, President Hassan Rouhani's government recognized Saturday, the Jewish Sabbath, as a Jewish holiday in 2018, allowing them to not go to school and work without being penalized, according to Cohler-Esses.
Until a few years ago, Muslims and non-Muslims were treated differently in civil suits involving the death of an individual due to negligence. The Jewish community consulted ayatollahs and took testimony from high-ranking clerics in order to convince the government that under sharia law, Muslims and non-Muslims must be treated equally in this regard. Eventually, they succeeded.
Zoroastrians, Jews and Christians in Iran are the only recognized religious minorities in the Islamic Republic's constitution and "are free to exercise matters of personal status and religious education and they follow their own rituals," according to the constitution."The government of the Islamic Republic of Iran and Muslims are required to treat the non-Muslim individuals with good conduct, in fairness and Islamic justice, and must respect their human rights," according to the constitution. Each religious minority has one representative in the Iranian Parliament.

Jewish Journal of LA reporter Karmel Melamed, who left Iran in 1979, comments on his Facebook page that he would never be granted a visa to report on the Jews of Iran:

1) The Iranian constitution DOES NOT offer Jews and other religious minorities equal rights or equal justice under the law. The regime's constitution and laws are based on radical Islamic Sharia law which gives non-Muslims inferior rights.

2) The article makes it appear as if Jews in Iran are safe there, which is 100% WRONG! It fails to mention the 3 torahs stolen from a synagogue in Tehran in Feb. 2019, the brutal murder of a Jewish woman in Isfahan in 2012, the 2017 attacks on synagogues in Shiraz, the 1999 random arrests and imprisonment of 13 Jews in Shiraz and other calamities the Iranian regime has brought upon the Jews of Iran since 1979. 3)

The article cites a 2015 report by the Jewish reporter Larry Cohler-Esses as a source for its information on Iran's Jews today, but fails to mention Esses was given a special visa by the regime go to Iran prior to the Iran Deal in order to write a lovely story about how the regime "treats the Jews well" in Iran. It also fails to mention that Esses was given a regime handler the entire time he was there to monitor his reporting and translate for him.

HOW ON EARTH WAS his report accurate, objective and not unfiltered when he had a regime thug following him around, translating Farsi for him, introducing him to Jewish stooges for the regime to parrot nice things about the regime to him and feeding him false info during his stay in Iran?

Ironic that Persian Jews once sought acceptance by adopting the Bahai faith, but today the Islamic Republic of Iran does not provide official religious status to Bahais.
1930 https://www.jta.org/1930/12/29/archive/persian-jews-embracing-bahai-religion-report

RE the first half of this posting - the Jerusalem Post considers the Forward to be a pro-israel publication? Are they kidding? This JP author has obviously never read the Forward. Why do you think it was given permission to report from iran? The Forward is the type of publication that anti-Semitic regimes love.

The Forward is a stooge publication for anti semitic regimes. There's a reason Iran chose them.

Iranian Jews have contributed a lot to Israel