Abu Nur, who rescued Jews from Iraq and Iran, dies

Among Jews from Iraq, it was well known that Israel was complicit in the smuggling (kachagh - illegally) of almost 2, 000 Jews through the Kurdish mountains in 1970 - 1. The man behind the operation was Menahem Navot, known to Kurds as Abu Hur. Navot also helped evacuate Israelis from Iran ten years later. With Navot's death aged 88, Haaretz tells his story:

In 1955, Navot transfered to the Mossad where he served a variety of roles overseas, including in the department that was responsible for the Mossad’s ties to organizations worldwide. He was sent to Iran in 1969, where he forged ties with the Kurds in Iraq, who helped bring the Jews of Iraq to Israel. 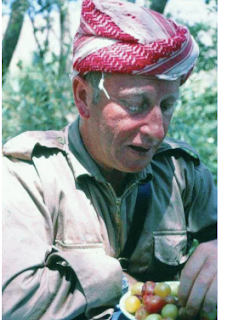 “The representatives of the Mossad had the addresses of the Jews in Baghdad and other cities in Iraq. We gave them to our friends the Kurds, and their representatives went to the Jewish homes and told them to get ready to leave,” he said. The Jewish families were driven in Kurdish jeeps to the Iraq-Iran border and from there into Iran and to Israel. The Kurds called Navot Abu Nur (“Father of Light”) because his eldest son was named Nir.

In September 1978, when the shah's rule was tottering, Navot was responsible for ensuring the safety of the Jewish and Israeli community and preparing to evacuate them in light of concerns over the impending revolution.

In January 1979, the storm hit its peak. Navot, who had been shuttling between Iran and Israel, came for another visit to coordinate the extraction of the last  (Israeli - ed) Jews in the country. On January 22, he was on the El Al flight to Tehran, whose airport was barely functioning by then.


“The pilot was coordinating with other pilots around him,” Navot wrote in his journal. “There was no one to land them. The pilot said he couldn’t go on with the operation under these conditions, and to complete it a military plane would be needed,” Navot recalled. “I said, ‘well, then, this plane is now a military aircraft.’

They said I was crazy,” he said. “We landed. The crew left us by saying: ‘the person who comes to Tehran is a hero. Who knows if this won’t be the last flight,’” Navot wrote. Navot was eventually extracted by the Americans after he completed his mission in Tehran.

Email ThisBlogThis!Share to TwitterShare to FacebookShare to Pinterest
Labels: Jews of Iraq, Jews of Iran