How Mimouna became an Israeli celebration

A plate of Mimouna goodies graces the front cover of the Jewish Journal of LA. Shmuel Rosner tells how a Moroccan-Jewish tradition - a party to mark the end of Passover - is now celebrated by 38 percent of all Israelis.

This process is evident in the waning of some “ethnic” traditions, such as the tradition of refraining from eating kitniyot during Passover (see graph, right). It’s also evident in the spread of “ethnic” traditions. While Ashkenazic Jews are losing the ethnic battle over kitniyot (probably for their own good), another group is winning the battle over another ethnic custom: Mimouna. This festival ceased being merely an “ethnic” custom long ago. It is a national holiday. So much so, that in 2016, then-Environment Minister Avi Gabbay decided to exempt Mimouna (like Independence Day) from the general ban on making noise after 11 p.m. Mimouna celebrations, which include late-night ululations, received an official stamp of approval. 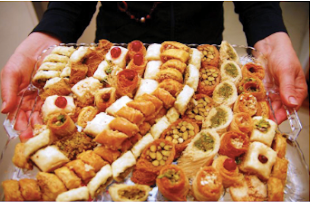 At some point, the celebrations turned mainstream in a way that made some keepers of the ethnic traditions uncomfortable. These people — a minority — started complaining of too quick a switch “from the erasure of a culture to its appropriation.” They argued that at first Israel pushed the Moroccan immigrants and their culture to the margins, but then was seduced by the smell of mufletot — the traditional Mimouna pancakes — to appropriate this part of the culture. Around half a million Moroccan immigrants, whether first- or second-generation, live in Israel today. This corresponds with our finding that one-tenth of Jews in Israel (9%) say they “host Mimouna at home.”

Around half of the hosts also “wear traditional dress” on Mimouna (4%). These are the numbers that represent a traditional “ethnic” holiday. Mimouna, however, requires not only hosts but also guests. In Morocco, Jews used to invite their Muslim neighbors to Mimouna. In modern Israel, they invite their Jewish compatriots from other communities, who are not fortunate enough to have such a beautiful festival of their own.

Therefore, almost 4 in 10 Israelis attend Mimouna (38%). More than one quarter of Ashkenazic Jews report that they attend Mimouna (27%). A similar proportion of Jews from the former Soviet Union report the same (28%). That’s not to mention Mizrahi Jews (48%) and Israelis from mixed families (43%). A simple calculation of hosts and guests reveals that almost half of Israel’s Jewish population celebrates Mimouna.