Egyptian Jews: How five minutes turned into years of detention 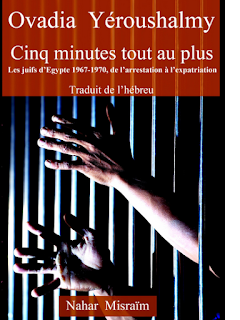 Hundreds of Jewish males were rounded up as 'Israeli PoWs' and imprisoned in Egypt in the wake of the Israeli victory in the Six-Day War. 'Cinq minutes tout au plus' is the ironic title of a new book by Ovadia Yeroushalmy, now available in French translation from Hebrew. The authorities came to arrest Jews, promising that they would be detained for no more than five minutes. For many their stay turned into two or three years and involved torture, deprivation and abuse.

Maurice Maleh (Association of Jews from Egypt - UK) has sent in this review:

Ovadia Yéroushalmy was born in Cairo in 1945 to an ordinary Jewish family typical of the Arabic-speaking Jewish community in Egypt.

Between 1964 and 1967 he attended the American University of Cairo to study Economics and Business Administration.

On  5thJune 1967, his world was turned upside-down as two policemen turned up demanding that he to follow them to the police station with the excuse that  it was only a ‘simple check, with no need to bring anything, as it will take just five minutes’.

Several hundred other Jews were being detained at the same time without rhyme or reason and with no judicial review.  For Ovadia, and many others, these so- called ‘five minutes’ turned into two long years of incarceration, a cruel waste of time for a mere 22 year old and his co-prisoners.

This book evokes the drama experienced by those arrested and describes the roles played by the state, International Institutions, other actors and personalities.  Ovadia contacted former prisoners and collected their testimonies, whilst also exploring various archives and press articles,  building up a dramatic account of this turbulent period of history affecting the remaining Jews of Egypt after the Six-Day War.