Seventy years after the exodus and expulsion of some 850,000 Jews from Arab states and Iran, the heads of communities of Jews from Arab countries are demanding the United Nations officially recognize the suffering they were forced to endure. Arieh Kahana writes in Israel Hayom (with thanks: Lily) 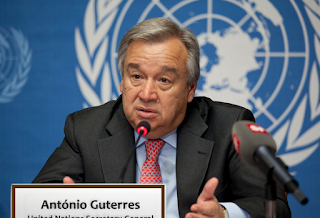 In a letter to U.N. Secretary General Antonio Guterres, community leaders, among them Dr. Shimon Ohayon, director of Bar-Ilan University’s Dahan Center and chairman of the Alliance of Moroccan Immigrants wrote, “While the U.N. organizes events to mark the departure of 450,000 Palestinians from Israel upon the establishment of the state, following a war imposed on Israel, we do not see recognition of the expulsion of Jews from Arab countries.”

They said, “We believe the U.N. strives for justice for all refugees around the world, including Jewish refugees who were expelled from Arab lands. We therefore seek to establish a memorial day for the Jews’ expulsion from Arab lands.”


Read article in full
Posted by bataween at Thursday, November 29, 2018

Why would mizrahim waste their time with such a hostile organization when they could be doing something more productive? At best, that pile of sh*t would actually recognize their suffering but then twist it into something more sinister.

Look up this book on Amazon and click on the book icon top left of the page.

It says "look inside"

Click on it and read the horrific index of this book

I'd advise anyone to buy it.

There has ALWAYS, for centuries been murder of Jews and pogroms and rapes and kidnapping

by Muslims of Jews who lived in the Magreb

You will be totally shocked.