A potted history of the Jews of Oman

The visit of Israel's prime minister Benjamin Netanyahu to the Sultanate of Oman may have taken much of the western media by surprise. In fact relations between the two countries have been an open secret for some time. Netanyahu's  is the latest in a series of visits by Israeli leaders: Yitzhak Rabin in 1994, Shimon Peres in 1996; the Omani foreign minister paid a visit to Jerusalem in 1995. Israel even had a trading mission until it was shut down at the outbreak of the second intifada in 2000. In 2008, Tsipi Livni, then Israel's foreign minister, visited Oman. 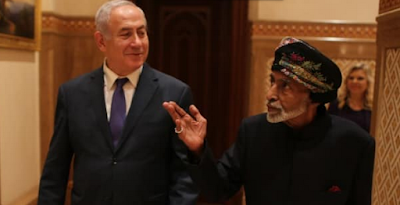 The small gulf state of Muscat and Oman, on the trade route to India and the far east, has been home to a small community of Jews until recently. The grave of the prophet Job is said to be 45 miles from Salalah, located in the south, and very close to the border with Yemen. Benjamin of Tudela,  who kept a diary on Jewish communities around the world, visited Muscat around 1170. Jewish merchants lived in Suhar since medieval times. According to the Gazetteer of Place Names in Muscat, published in the 1970s, travellers reported the presence of Jews in Muscat in 1625 when the port was under Portuguese control. A synagogue was built in 1673.

In 1828 Jews fled the oppressive rule of Daoud Pasha in Baghdad and settled in Oman, where they practised silvercraft, money-lending and alcohol production. It was claimed that Oman had as many as 350 Jewish families there, mostly from Yemen and Iraq. Between 1830 and 1860 they represented British interests, as in the port of Aden,  but by 1900 they had mostly disappeared.

The last Jew of Oman was thought to be Sulayman al-Yehudi. He left the state in 1948: his children and grandchildren converted to Islam.

Today expatriate western Jews live in the sultanate, but there is no official Jewish community.
Posted by bataween at Saturday, October 27, 2018

Merry Christmas,
You are so interesting! I don't believe I've truly read through anything like that before. So wonderful to discover another person with a few unique thoughts on this issue. Seriously.. many thanks for starting this up. This website is something that is required on the internet, someone with a bit of originality! If you want to read Christmas Quotes For Husband you have to see the link
Thank you,

Hi,
The very next time I read a blog, I hope that it does not disappoint me as much as this particular one.sample new year greetings I mean, I know it was my choice to read, but I truly thought you would probably have something useful to say. All I hear is a bunch of crying about something that you could possibly fix if you were not too busy searching for attention.
Thanks