Jews of Kurdistan: 'afraid to complain'

There is precious little information on the life of Kurdish Jews before their exodus to Israel, so  Mordechai Zaken's PhD thesis, published by the Hebrew University in 2003, is  valuable reference material. Here we are publishing an extract from his PhD thesis, later published as a book. Part II will follow on Sunday.

A common pattern of Jewish behavior reflecting their fragile position was the lack of response to violence and the reluctance to complain about wrong-doings in order not to fuel an atmosphere of hatred. A British traveler witnessed in 1840, in Arbil, an incident in which a young Shi'ite slapped a respectable Jewish store -owner, cursed him and spat at his face. A local companion explained: "he is only a Jew." The Jew was unable to respond. A Jewish emissary reported that seven Jews were murdered in Arbil within two years and it seemed that the governor did not care, "as if the blood of the Jews is free" and "the Jews are afraid to complain."

The Jews were the weakest caste in the society and "gradually became the pariahs and outcast, despised and degraded." They were exploited, robbed and murdered by outlaws. Murder of Jews may have been justified by a socio-religious concept of " Kafir- Kuşt ," (Kurd., killing of infidels). The lack of proper, or any, police response and the leniency of both the tribal and judicial system towards murderers of Jews, further show the insignificant value of a Jewish life.

When a murder of a Jew occurred in the tribal region in remote villages, it would generally lead to the migration of the whole family, which had been in a state of shock and distress, since it became apparent that the agha and the tribal society had failed, in practice, to provide protection. Their trust was exhausted. They would need to seek permission from the agha, as it meant for him loss of future income (in dues and services), and they had to seek permission from the agha under whose jurisdiction they wish to settle. These de facto rules had been gathered from the experience of the frequent migration patterns of rural Jews.

The Jews ’ non-tribal status and social inferiority facilitated acts of abduction either by force or through temptation of young Jewish women by Kurdish men for whom it was not as complicated and dangerous as the abduction of tribal women. Not only could Muslim Kurds marry in theory four wives, they also did not have to pay a dowry for the Jewish wife and her family.

In retrospect, these abductions were counted as converts into Islam of Jewish women. Therefore, the Jewish communities opposed these abductions. In general, the Jewish communities employed three mechanisms in an attempt to bring back kidnapped Jewish daughters to their families: the first method was the appeal to the local authority (local leaders, police officers and tribal chieftains) for the return of the kidnapped girls; the second method was the establishment of a communal panel of deliberation, through which the Jews would challenge the tribal Kurds involved in an attempt to have them bring the Jewish woman back to her family; and the third method was to allow a period of seclusion for the Jewish woman in question, during which she would contemplate her decision while separated from her Muslim associate and far from his influence, under the supervision and the pressure of a respected Jewish person or family. In Mosul and the surrounding area, Sasson Tzemah, a member of parliament (1932-1951) would press the police and the army to search for the abducted Jewish women. In Aqra, the Jewish family of Khawaja Khinno would act the same.

Interestingly, in 2011, I was introduced by a new source, through an email correspondence from Turkey which reads (with the necessary editing) as follows:

I am a journalist from Turkey who has just found out that you have written a significant book regarding Kurdish Jews … . I have realized that I actually have links with the Khawaja Khinno (or Gabbai) family (originally from Aqra). The story, which you are telling in the book, is absolutely the same as what I have been told by my grandmother. My grandmother is a niece of Khawaja Khinno (Turkish pronunciation: Xace Xino). She has been telling us her personal history and her family's history for many years. She is still alive and is most probably up to 100 years. She was married to a Kurdish man (my grandfather) in her early teen age [years] and moved (from Aqra, Iraq) to Turkey. She therefore has never ever seen any member of her family since then. We too basically, until now, had no idea of finding her family and had no clear knowledge of the family's survival. However, now, through your book, we know a lot. When I told these all to my grandma, she got excited about a possibility of which we could somehow find her family. If I understood correctly, one of her cousins, daughter of Yitzhak Khinno, Salima, is one of your sources in the work, or at least some members of the family were your sources. I would therefore be glad if you could help me find some of the members of the Gabbai family . I will be looking forward to hearing from you Mr. Zaken . Many thanks in advance , Hamza Aktan (Turkey). 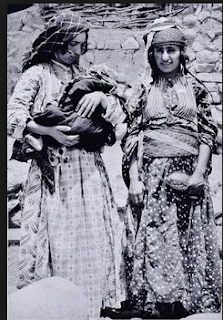 This was a recollection from the past. A young Jewish girl, named Nazê, was kidnapped from her home in Aqra, Iraqi Kurdistan, sometime between 1910 and 1920. In 2005, a grandchild of hers made a film called Nazê in which we learn that she  was tempted or seduced to leave her family and join a Muslim youth, a total stranger. She speaks about the status of her Jewish family (Khawaja Khinno) and their relationships with both officials and with Barzani chieftains. Irfan Aktan, another grandson, wrote a book in 2005 entitled "Nazê, a story of migration" (in Turkish). Interestingly, the quotes of Nazê in the film were identical with the quotes of the members of Khawaja Khinno whom I interviewed during the 1980s and the 1990s (even though there was no contact between the parties since 1920s). Nazê's voice and experience is an important testimony for abduction (via temptation) of Jewish girls by Kurds. In the movie she speaks of her escape while Barzani tribesmen (the patriarchs of Khawaja Khinno have been in close contact with the chieftains of Barzan) are chasing them and trying to trace the abducted Jewish girls (there were two girls).


Mordechai Zaken, “Tribal Chieftains and their Jewish Subjects
in Kurdistan:
A Comparative Study in Survival,”
The Hebrew University of Jerusalem (2003).