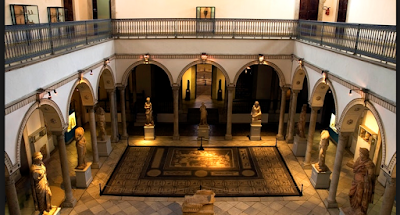 The Bardo Museum in Tunis: 'Judaica no longer displayed'

A Jewish Museum is to open in Tunisia.

According to a report on the CRIF website, the organisers have called for documents, books, ritual objects and souvenirs for the new museum in Tunis, which is to be sited in the historic Jewish quarter. A meeting is to be held on 22 May in Paris to discuss the project and to set up an association for the preservation of Tunisian-Jewish heritage.

They argue that young Tunisians are unaware of that an ancient Jewish community lived in the country until recent times: Taking its cue from Moroocco, the only Arab country to-date with a Jewish museum, the Tunisian museum would go some way to raising awareness of the historic contribution of the Jews.

However, the proposed museum is not without its critics. Jean Loup Mordekhai Msika has written to one of the prime movers, Lucette Valensi, pointing that Tunisian customs officials confiscated personal objects from Jews forced to leave the country. He himself wanted to take his grandmother's cheap enamel teapot out of the country. The customs official bellowed,' this stays here!'

"Defenceless citizens, they  could neither enjoy security not freedom, as the country wanted to take revenge for  the failure of the Arabs to throw the Jews into the sea," Msika's letter said.

Msika reminded Mme Valensi that under president Ben Ali, there was a room displaying Judaica in the Bardo museum. The Judaica was no longer on display  once Ben Ali had been deposed, Msika claimed.

"The first priority," Msika wrote,"should be for Mme Valensi to find out what happened to these objects." If the Tunisian government wants to project an image of democracy and tolerance,  he continued, it should account for seized objects.
Msika, an architect,  has been working on his own project for a Jewish museum of Jews from Arab countries in Jerusalem.