'History of Jews from Arab lands has been distorted'

The Jewish cultural institute Spiro Ark recently held the official launch for UPROOTED by Lyn Julius. Lyn is the director of Harif (Association of Jews from Middle East and North Africa), with whom Spiro Ark frequently collaborates on exciting projects. 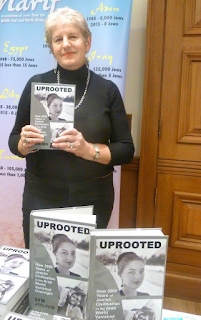 
Lyn's book addresses many of the difficult questions concerning the exodus of Jews from Arab lands and, during her interview with Saul Zadka, Lyn presented several of her analyses of the causes and effects. See what Saul asked Lyn, HERE. Here is a blog about the launch by Spiro Ark:

We asked Lyn a few questions of our own:
1) What inspired you to write your book?

"I have been gathering published information on the topic of Jews from Arab and Muslim countries for about 13 years and posting links to articles on  Point of No Return.  It is a much neglected and misunderstood issue, yet is central to an understanding of Israel and the conflict. Academics have written about it, but I realised that there was a need for a book accessible to the mainstream that could also serve as a work of reference."

2) Can you please tell us a little bit about the writing process and your research?
"It was through blogging that certain themes seemed to suggest themselves. I adopted an analytical, rather than a historical approach. I had already written much of the material over time, but it was quite a challenge to knit it all together into a coherent whole without repeating myself too much."

3) What aspects do you feel are often overlooked/what are the misconceptions relating to the experience of Jews from the Arab world?
"I almost chose the title 'Three colonisations'. The first is the colonisation of the indigenous peoples of the Middle East and North Africa by the Arabs and Islam. The second is the 19th century European colonisation: this 'liberated' the Jews from their servile dhimmi status, but ultimately betrayed them. The third colonisation is that of the history books. Jews from Arab countries have been systematically ignored and their history distorted: Israel is blamed for ending 14 centuries of 'peaceful coexistence' between Jews and Arabs."

4) I have heard you mention that the term Arab-Jew is anachronistic, Jews having come before Arabs, can you expand a little on your objection to the term?
"Yes, the Jews are pre-Arab by 1,000 years. I object to the term because it is imprecise. The Jews of the Babylonian exile also settled in Persia, a non-Arab country. Not all Jews speak Arabic. Nowadays, the expression "Arab Jew" is used by Anti-Zionists to infer that Jews are Arabs of the Jewish faith. Therefore, they are not a people with a right to self-determination."

5) Your parents were Iraqi refugees. In Shimon Ballas’s novel ‘Outcast’, set in Iraq, his protagonist converts to Islam and does not emigrate. I interpreted this, in the simplest terms, as Ballas suggesting that it was not possible to remain in Iraq, as a Jew, particularly after the Farhud (the 1941 pogrom of Jews in Iraq). Would you say this is an accurate assessment?

"Yes, I would agree. Jews found they could not be accepted as equal citizens when Arab states became independent  unless they converted (there is a similar character in Eli Amir's Dove Flyer.) The Farhud showed they could not rely on the state to protect them."

6) Writers such as Eli Amir and Sami Michael, including in the film ‘Forget Baghdad’, express the sentiment that Mizrahi refugees, specifically, experienced discrimination in Israel. You suggested their experiences were not specific to the Mizrahim, can you elaborate on this a little please?

"Social Discrimination was real enough, but it was not confined to Mizrahim. Holocaust survivors were despised as 'sabon'. Ben Gurion wanted the new arrivals to put the past behind them. Of Yiddish he said "that language grates on my ears". He wanted to transform the weak Diaspora Jew into a virile, Hebrew-speaking Israeli who could build the country and defend it. But Ben Gurion did not discriminate against new immigrants on ethnic lines, and once said "I would prefer a fit Persian to a sick Pole"."

off topic//
Alan Dershowitz takes up the justice of palestinian Arab claims for "return" as well as the treatment of Jews in the Arab world generally and Morocco in particular.
https://www.gatestoneinstitute.org/12014/refugee-jews-morocco-palestinians-israel