This paper in Middle Eastern Studies by Avi Picard shows that, in Israel's early years, prime minister Ben Gurion was consistent in preferring a selective aliya policy prioritising young and healthy immigrants to build the country, rather than rescue endangered Diaspora Jews. (He did not discriminate on ethnic lines. When Jews from Poland  came flooding in during the mid-1950s, including some very sick immigrants, he said, 'I would rather a healthy Jew from Persia than a sick one from Poland.') However, Avi Picard shows that he was prepared to revise his preferences when he perceived communities were genuinely at risk.

Three events in October and November 1955 sharpened the conflict between rescue and building. In early October, it was news of the arms deal between Egypt and Czechoslovakia,which altered the balance of armaments in the region and inspired great fear in Israel. On 3 November, a new Government was installed in Israel, with Ben-Gurion returning to the prime minister’s office. On 16 November, the exiled Sultan Sidi Mohammed ben Yusef (later King Mohammed V) returned to Morocco and the country’s march to independence gained momentum.

The country’s faster-than-expected progress towards independence added a new concern: no longer just the safety of Morocco’s Jews during a revolt against the colonial authorities, but now their very ability to leave an independent Morocco. If the fear for their safety was abstract, the fear that they might be trapped in the country was all too concrete. 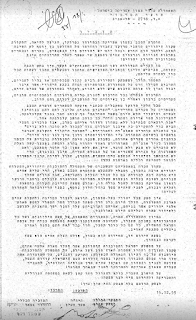 Jewish Agency report pleading for greater aliya from Morocco, written about a month after the return  from exile of the sultan, Mohammed V, to Morocco in 1955, and four months before Morocco received independence from France. It describes the insecurity and economic boycotts to which the Jews in Morocco were exposed. (Zionist archives,  s6/ 7260)

The newspapers of the nationalist parties often asserted that the Jewish Agency’s activity in Morocco revealed the Jews’ lack of allegiance to the country and demanded that the Agency’s offices be closed and Jewish emigration
halted. In addition to their call on the Jews to show loyalty to the country, the
nationalists’ hostility to aliya was fed by the Arab countries’ unwavering opposition to it,because of aliya’s demographic contribution to Israel and because young olim were available for service in the armed conflict with the Arab states.

In the wake of the political developments, Moroccan Jews grew apprehensive and thousands applied to make aliya. But the aliya pipeline was too narrow to meet the demand. While Israel permitted the immigration of 3,000 Jews a month – 36,000 a year –there were more than 100,000 Jews left in Morocco who wanted to get out, and the clock was running down for their freedom to do so. In late 1955, Berl Locker, the chairman of the Jewish Agency Executive, estimated that within nine months, the Moroccan government would ban Jewish emigration. In fact, the gates slammed shut within six months.

Given this situation, the Government and the Jewish Agency Executive held a joint meeting in December 1955. The discussion focused on ways to deal with the increased demand for aliya from Morocco, given the risk of war with Egypt and need to allot budgets for security and weapons purchases. Golda Myerson (later Meir), then the minister of labour, believed that Morocco’s Jews were in grave peril:

Perhaps this is a bit strange.… [Look at yourselves] the day after Morocco declares that no Jew can leave there… No one knows when… We have already experienced such disasters.… I don’t know how deeply France will be willing to get entangled with Morocco about Jewish emigration.… The aliya of Moroccan Jews does not allow me to rest.… What will I do, myself,after aliya from Morocco and Tunisia is barred and I have the feeling that I could have done
something but did not.… I know that from the cold intellectual perspective it is quite absurd to speak about a large aliya.… However, we cannot tell these Jews ‘we won’t take you’.… I saw a cable from a responsible person that said: ‘even to transit camps’. I view the danger soberly and do not delude myself. I know that if we place them in transit camps there will be scandals and sit-down strikes.… I know that it will be catastrophic if we don’t take them to frontier districts and development areas but house them near Tel Aviv, but all the same I cannot
give up and leave the Jews there.