Baroness alludes to Jews of Iraq in minorities debate

It is not often that the UK House of Lords is made aware of the tragic plight of the Jews of Iraq, but in a debate on religious minorities in Iraq on 11 January, Baroness Ruth Deech managed to devote a few minutes to their history while appealing for the British government to take a proactive approach to the protection of minorities. 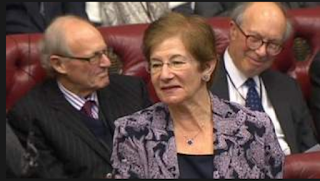 Baroness Deech in the UK House of Lords

"Sometimes it is difficult for us here in this tolerant country to understand the role played by religion elsewhere. In the area under debate today, it is not just a question of choice of belief; religion equates with identity. Indeed, one reason why so many countries in the Middle East are in turmoil is that the nation states there, sometimes created by western colonialists 100 years ago, do not coincide with religious boundaries.

Those new states have bundled together people who identify with their communities across boundaries rather than in their own neighbourhoods. To be a religious minority is seen by the ruling class as if one was a foreigner at best and a traitor to the community at worst. It has become especially dangerous to be a minority since the rise of Daesh. Nor is this attitude confined to Muslims; we have seen the atrocities committed against the Rohingya Muslims in Burma by the majority. But in determining cash and protection allocation, the UN High Commissioner for Refugees does not include religious persecution as one of the vulnerability categories. It is time for religious persecution to be up front in UN relief work. Will the Government urge the UN bodies to confront this?

Religious tolerance has been on the decline in Iraq since the 1920s, in tandem with the rise of Arab nationalism and the growing Islamisation of Iraq’s society and state. A good example is the expulsion of the Jews in the 1950s. Today, it is the Yazidis, Palestinians and Christians under threat.

The Jews of Iraq had a history going back 2,000 years; now they are non-existent. A century ago, one-third of Baghdad’s population was Jewish. We have heard much about the centenary of the Balfour Declaration in recent months. One aim of that important document was that,


“nothing shall be done which may prejudice the … rights … or the … political status enjoyed by Jews in any other country”.

What followed was the persecution, killing and expulsion of Jews across the Middle East. Jews allegedly came to Iraq after the exile from Jerusalem in 586 BC. Babylon was a focus of Judaism for more than 1,000 years. A millennium later, Islam arrived there and persecution started. In the 1930s, Iraq followed the German lead in barring Jews from education and the professions. In imitation of the Nazis, there came a pogrom, or “Farhud”, in June 1941, during which an Iraqi mob burned Jewish property, looted houses and hundreds of Jews lost their lives. After the creation of Israel, things got even worse for the Iraqi Jews, regardless of their political affiliation.

Jews were dismissed from virtually all jobs, and to be suspected of being a Zionist was punishable by execution. At first, they were forbidden to emigrate; it later became government policy to get rid of them all. Nearly all the Jewish families left in the 1950s, and their property was forfeit. Saddam Hussein hanged nine Jews as supposed traitors in front of a crowd. The United States has guarded the significant archive of Jewish artefacts in Iraq, all that remains of the community, but is likely to return it to Iraq. Will the Government urge the US to continue to protect that archive?

This year, a new law by the Iraqi Government will target Palestinians living there. It will effectively abolish rights given to Palestinian refugees, causing them to be treated as foreigners rather than nationals, even if born in Iraq. The new law deprives Palestinians living in Iraq of their right to free education, healthcare and travel documents, and denies them work in state institutions. Most of that community has gone to other countries, such as Canada, Chile, Brazil and elsewhere in Europe, where they are better treated than they have been in their homelands. Will our Government press the Iraqi Government to reverse this law, number 76 of 2017, and condemn the treatment of Palestinians in Iraq?

One remedy for this grave situation lies with the British embassy. In Iraq and elsewhere in the Middle East, a human rights focus should be incorporated into embassy work and our diplomats should monitor freedom of religion. The Foreign and Commonwealth Office has issued guidance on how to handle discrimination and suggests that countries that deny freedom should be asked to accept a visit from the UN rapporteur on freedom of religion and belief. It is noted that the UK can support, from the aptly named Magna Carta fund, individuals and organisations working to achieve freedom of religion. Our diplomats can visit victims, attend trials and lobby ministries.

I fear that these excellent intentions may not achieve much, because at the apex of all international effort lies the UN Human Rights Council, a body now so perverted that it no longer makes sense to support it.

Read speech in full
Posted by bataween at Wednesday, January 17, 2018