Why N.African Jews are missing from Shoah story

Why is the Mizrahi Holocaust experience missing from Israeli media and art? Very simply, because the deaths of hundreds pale into insignificance compared to the enormity of the genocidal murder of half of European Jewry. Yet Yvonne Kozlovsky Golan, interviewed by Eness Elias, blames 'racism', 'stereotyping', the inablility of European interviewers to probe a culture of silence or understand the Mizrahi shame-honour mentality. Of course, all these factors play a part. (With thanks: Lily, Imre, Edward) 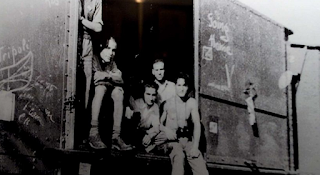 Libyan Jews returning from Bergen Belsen after the war

My grandfather was a very proud person. He uttered not a word about the Holocaust he endured in Libya; only once did I hear him talk about the renta, the reparations from Germany, which, by a cruel irony, began arriving a month after his mother died. I heard that his mother’s back had been broken in the camp and that from then on she was completely hunched over. So I also understood that there had been Nazis there.

At first, my family’s involvement in that incomprehensible event seemed to me improbable, and later negligible. At some point I started to explore the subject more deeply, and heard about the Giado camp, closed in by a barbed-wire fence, with wooden huts holding more than 300 people each. About 2,600 Libyan Jews were transported to the camp and subjected to forced labor. They suffered from hunger and disease, and were the victims of daily abuse. Many were murdered – 562 Jews died there – and dozens more were sent to death camps, notably Bergen-Belsen.

To this day, it remains unclear whether Giado was a ghetto, a forced-labor camp or a concentration camp. What can be said for certain is that there were many camps like Giado across North Africa. The echoes of war also reverberated in other Arab countries, such as Iraq, where pogroms and other violent incidents took place.

All this is part of the unknown story of the Jews of the Middle East during World War II – a story that is not part of the construct of the Holocaust experience in Israel. In a new book, Yvonne Kozlovsky Golan, who specializes in film history and teaches at the University of Haifa, seeks to understand why the Holocaust experience of these Jews is absent from Israeli media and art, and what this obliviousness signifies.

The idea for the book, “Forgotten from the Frame: The Absence of the Holocaust Experience of Mizrahim from the Visual Arts and Media in Israel” (published by Resling, in Hebrew), Dr. Kozlovsky Golan relates in an interview with Haaretz, arose when she realized that the Mizrahi (referring to Jews of North African or Middle Eastern origin) students she taught some years ago at Sapir Academic College in Sderot had no knowledge of the history of their communities, or even of their families, during the Holocaust period.


Read article in full
Posted by bataween at Sunday, December 24, 2017

Email ThisBlogThis!Share to TwitterShare to FacebookShare to Pinterest
Labels: Holocaust in Arab and Muslim lands, Jews of Libya, Sephardim/ Mizrahim