The announcement that the Egyptian government will be funding the repair of the nineteenth century Eliyahu Hanavi (Nebi Daniel) synagogue in Alexandria has elicited a rare piece in the Guardian, a newspaper not noted for its coverage of the plight of Jewish communities in Arab lands. The writer, Ruth Davidson is to be commended for putting the issue in the context of Egypt's discriminatory treatment of all minorities. See my comment below: (With thanks: Nelly, Alec, Adam and Stan) 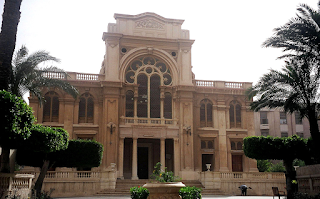 “This is a great project for all Egyptians,” said one engineer, who declined to give his name. “The project should last an entire year. We’ll be restoring the entire building,” said another, identified only as Mohammed.

Yet this handful of engineers was the largest group of visitors the neglected synagogue has seen in some time. The move to restore the building, as well as other Jewish sites in Alexandria, comes after months of pressure from Jewish exiles around the world, fearful that the city’s diverse past would otherwise be erased.

Alec Nacamuli, a member of the Nebi Daniel Association campaigning to protect Egypt’s Jewish heritage, welcomed the move, adding that the organisation has been “more aggressively” pushing for the restoration of Eliyahu Hanavi since the ceiling collapsed because of water damage.

Nacamuli, whose grandfather was the president of Cairo’s Jewish community, is now exiled in London from his native Alexandria. “There have been some frustrations,” he said of the efforts to get the Egyptian authorities to heed the needs of Egypt’s Jewish diaspora.

Egypt has a poor track record of protecting its religious minorities and their houses of worship, notably the country’s largest religious minority of Coptic Christians, who make up an estimated 10% of the population.
Security around Alexandria’s synagogue is so tight partly because of fears after a recent spate of Isis assaults on Coptic Christian churches.

A long-awaited law in 2016 clarified the rules around church building and provided some aid to the beleaguered Christian minority, although observers such as Human Rights Watch argued that the state has done little to protect Christian citizens from violent attacks. In a country where religion is marked on each citizens’ identity card, Egypt’s Shia and Bahai minorities also face daily persecution and are prevented from building places of worship.

But Egypt’s Jewish past is more fraught with geopolitical sensitivity than other minorities. Once a community of almost 80,000, numbers began to dwindle after the creation of Israel in 1948 sparked conflict between Egypt and its new neighbour.

This resulted in increasing pressure on Egypt’s Jewish citizens, including incarceration. About 25,000 Jews were formerly expelled in 1956, after being presented with a one-way travel document to leave and a demand to cede their property to the government. The number of Jews in Egypt is commonly estimated to be fewer than 50.

Covert efforts to upgrade the country’s synagogues in 2009 were met with widespread reports in the international press that the true motive was Egypt’s push for then-culture minister, Farouk Hosny, to lead Unesco.

Egypt is once again running to head the United Nations’ cultural and heritage body after nominating former politician and ambassador Moushira Khattab in 2016. But it insists there is no ulterior motive for the restoration.

My comment: the article fails to point out that the legal responsibility for repairing and maintaining Jewish houses of worship falls on the community in question. However, there are so few Jews in Egypt (fewer than 13, not 50 as stated in the article) that it is absurd to expect the tiny community to bear the burden. Moreover, the Egyptian government has made a virtue of necessity, given that the Jewish community head, Magda Haroun, an anti-Zionist, has opposed accepting foreign funding on the grounds that most Jewish associations abroad interested in making donations are groups supportive of Israel. The article suspects the underlying motive for Egyptian funding is to bolster the candidacy of the former politician and ambassador Moushira Khattab
to be head the United Nations’ cultural and heritage body. There are two other motives: the restoration of the grandiose Eliyahu Hanavi synagogue will boost tourism (the Ben Ezra synagogue in Cairo is already a popular attraction) ; state funding will legitimise Jewish sites as state property. Already, movable heritage, such as communal records and Torah scrolls, have been declared to be Egypt's patrimony, frustrating the long-running campaign by the Nebi Daniel Association to ensure their accessibility to diaspora Jews.
Posted by bataween at Friday, September 08, 2017

I recently saw that someone had written about the synagogue on Facebook, claiming that "the Jews were expelled from Egypt for supporting the occupation of Palestine". I pointed out that this was a blatant lie! As the article rightly points out, the Jews were not expelled until 1956, when General Neguib seized power in a coup d'état. Jews were not the only people to be expelled, so were Christians and others with foreign nationality. It has wrecked the Egyptian economy, which before 1956 was a net exporter of wheat and a prosperous country. In 1956, I met a group of children in Paris, we were all on different school group holidays with our schools, the French lycées, in their case, those of Cairo and Alexandria.Christian and Jewish parents were sending their children abroad in order to get them out of the country to safety, a sort of youth aliyah or kindertransport. Of course, they would not be returning to Egypt. I know of one boy, Maurice Etchinasi, who ended up in Canada.