The Economist reports on the Goutte de Lait project to catalogue 20,000 Jewish documents in the basement of a Cairo synagogue.  Of its 20 members, only one is a Jew. None knows Hebrew. The initiative is spun as 'outreach', 'preserving Egypt's Jewish heritage' or 'coming to terms' with Egypt's 13 or fewer Jews: what it does, in reality, is complete the last stage in the mass dispossession of Egypt's 80,000 Jews. As such, for Egypt to retain these Jewish documents is no different from  Iraq claiming ownership of the 'Iraqi-Jewish archive'. (With thanks: Nelly) 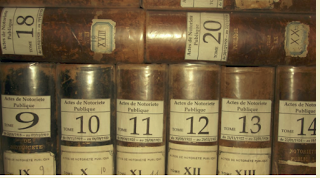 Some members have Jewish fathers who converted to Islam to avoid expulsion under Gamal Abdel Nasser, Egypt’s former dictator, an aggressive Arab nationalist. Others married Jews. Most simply want to preserve Egypt’s pluralist past. “We’re reopening a page of history that was deleted from our textbooks,” says Amir Ramsis, who directed a documentary about Jews in Egypt. There are 12 synagogues left in Cairo. Many are in poor shape. The group is based in one of them, called Sha’ar Hashamayim (Gate of Heaven), and it plans to turn others into cultural centres.

Members talk hopefully of a “renaissance”. Twice a week they will gather to learn Hebrew so that they can catalogue the 20,000 books in the basement of Sha’ar Hashamayim. They want to create an exhibition of Egypt’s Jewish history in the synagogue and to protect other sites, such as the Jewish cemetery in Cairo.

Some do not share the group’s enthusiasm. Egypt has fought four wars against Israel. Even Jews who worked alongside Egyptians against British colonialism were branded enemies of the state and expelled. Some of those who remain prefer to keep a low profile. American Jewish groups believe Egypt’s Jewish heritage would be better protected outside the country.

But since the revolution in 2011, Egypt’s leaders have reached out to local Jews. In 2012 a leader of the then-ruling Muslim Brotherhood broke a taboo by calling on those who were expelled to return. In 2015 state television broadcast “The Jewish Quarter”, a soap opera that depicted Jews in a positive light. Last month the antiquities ministry began work on a $6m project to restore the roof of Alexandria’s synagogue. Some see the moves as an effort to win over Western governments; others say that they are only happening now because there are so few Jews left. But it might also be that after four decades of relative peace with Israel, Egypt is coming to terms with its Jews.