How I, a Libyan antisemite, became a Jew

Ed Elhaderi went from pinning up posters of Yasser Arafat in his native Libya in  the 1970s, to marrying a Jew and converting to Judaism. Jewish Journal charts his remarkable spiritual journey (With thanks: JIMENA) : 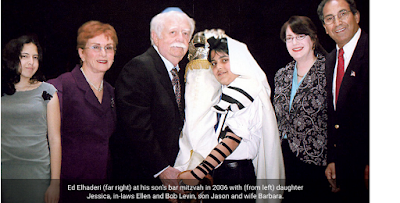 Ed and Barbara Elhaderi (far right) at their son's Barmitzvah

That hot afternoon seems like yesterday, but it was 50 years ago this month. I was 15 and living in Sabha, a small city in the Sahara Desert of southern Libya. An older cousin told me about the reports on Cairo Radio about the dire situation facing the Egyptian army.
“We’ve got to do something,” he said.
I didn’t fully understand the politics of what would come to be known as the Six-Day War, but I knew that what was happening was bad for us as Arabs and Muslims. All around me were other teenagers absorbing the tense mood and looking to vent their rage at the Jews. I followed the crowd to the only Western-style establishment nearby, a bar. It was early afternoon and the place hadn’t opened yet. A few older boys broke down the door, and a crowd stormed in, breaking bottles and dumping alcohol onto the street outside.
Standing in a crowd, I joined the chants: “Death to the Jews!” “Drive the Jews into the sea!”
The truth is that I had never actually met a Jew. I grew up in a small nomadic village of 20 families, a collection of mud huts with palm-frond roofs that wouldn’t have looked much different 2,000 years earlier. Health care was so primitive that by the time I was a young boy, my parents had lost three children to illness.
Sunni Islam was the only way of life I knew. My preschool was in a mosque, where an imam taught us to read and write by drilling us with verses from the Quran. After that, our education was more secular — I went to mosque, going through the motions, but I was hardly devout. I never was exposed to any alternatives or avenues to question the life we had.
Our textbooks didn’t mention Israel, and people used the word Yahudi, Jew, only as an insult. The Jews had rejected the Prophet Muhammad, so they were considered to be condemned. The only Jews I saw were in Egyptian movies, in which they were portrayed as menacing, monstrous characters — hunched over and speaking with high-pitched nasal accents.
I did know Palestinian Arabs. My elementary school had once hired a young Palestinian as a teacher. Because he was Palestinian, the community welcomed him warmly and supported him generously.

Read article in full
Posted by bataween at Tuesday, June 27, 2017

Email ThisBlogThis!Share to TwitterShare to FacebookShare to Pinterest
Labels: Antisemitism, Jews of Libya