Meet Amir Hamoui, the new president of the phantom Jewish community of Algeria. (There is a precedent: the president of the non-existent Kurdish Jewish community is a Muslim).  On his blog Hamoui declares himself to be  the son of a Russian-Jewish woman, then claims to be also a Christian serving the Pope and appointed by the Vatican (Praise be to Jesus). His Facebook page proclaims that he is not from Algiers, but St Petersburg. Curiouser and curiouser! (With thanks: Boruch) 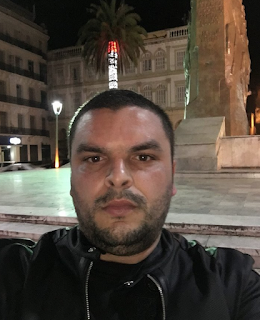 Amir Hamoui succeeds Roger Said as the President of the Jewishcommunityof Algeria. Said died in 2012.

'Hello, Ladies and Gentlemen, I am proud to be among you and I will be the pride of my family and friends, and for everyone to be under the leadership of Pope Francis and I will be his spokesman and on behalf of the Pope of the Catholic Church and the Vatican is a pleasure and pride for me and I am very happy to represent the Pope and Jesus in all the countries of the world that have diplomatic relations with the Vatican. I have to thank all the people who have contributed to my support from all sides,  the clergy, politicians or even heads of state, artists and athletes. We thank them very much for all of us - the Lord Jesus with you in good and bad. And the love and peace that once gave us, thank the Lord Jesus More appreciation and respect from me. Yours sincerely.

'My story :
Amir Hamoui was born (August 22 / August 1988) is a Russian of Algerian origin, was born in Algiers (Algeria) from a Christian family of a Jewish mother Jacqueline Rebecca Hamoui, professor of Russian, Ukrainian, Hebrew. Hewas born in Algeria (Tlemcen province) where he was appointed by the Russian president in 2015 adviser to the Russian Foreign Ministry.  I worked a translator of foreign languages ​​in the federal Moscow embassy in Algeria for HE Ambassador of Russia in Algeria Alexander Zulotov between 2007 and 2014. Then I went to Italy to support the missionary movement through education. Pope Francis himself appointed Amir Hamoui, the spokesman for the Holy See and his interpreter, and I am proud of myself, my family and friends for the support I get from them both at work and outside. I am proud to serve the Pope, the Vatican and the Pope in particular. I was called back to Algeria to be the representative of the Jewish religion in Algeria.'

Read blogpost in full
Posted by bataween at Sunday, April 30, 2017

Do not delete the article. Why delete it. Was there something untrue about Hamoui's biography. Freedom of speech is paramount here. If Amir Hamoui wants to dispute the facts about his origins, let him discuss them in this forum.
Even Roger Said used was used by the Algerian military junta in power for decades as part of their tokenism for Jewish openness and understanding. This openness is fake and devoid of any meaning, diplomatic wire fake news will certainly make a dent in the eyes of those who do not know the real story of Judaism demise in Algeria and everybody with some gray matter knows it.

There is absolutely nothing that is genuinely Jewish in Algeria. Nothing. Nada. Rien. Oualou. Shum Davar. (Apart from the confiscated old synagogues which are now unrecognized and used as depots or post offices (Algiers) or the all "can't hide" cemeteries, to which marbles plates and stones were used as construction material for the housing boom in the 1990's)

Replacing Roger with a representative appointed by the pope and the blessing of the all the all mighty military junta and its Russian style secret police will not add anything new to the well known Putin or I should say old Ukrainian style fake news and big data lies and propaganda.

Like the saying goes: "If you cannot convince them, confused them" and that's the objectives of the neo-soviet style propaganda.

[I used to be a contributor to this blog. My pen name, I will not be using it.} Thanks

Sorry I cannot read Arabic. Please translate for all to know. Thanks

To Anonymous
Apparently, after Algerian independence, not being from the right religion, and with ties to the Russian embassy due to his work as translator of "holy books", the family emigrated to Russia in 1964, just like others emigrated to France in those days. Sofar so good. What baffles me is his use of Jewish Christian to describe his faith. Not Jewish AND Christian. That is what needs to be clarified...


1. Part of the cut and paste in the article has been cut off. It could possibly refer to his father or mother who was adviser to the Russian ambassador.
2. He obviously doesn't know there is no Jewish community anymore to be President of.
3. Community buildings have ben either changed to a mosque like the synagogue of Oran, or rased to the ground to make room for parking lots and now it's the turn of cemetaries.
4. He also doesn't realize that just mention of the word "Jew" in his bio can send the average Algerian into a frenzy. Jew hatred is the only ideology the Algerian population have in common, the cement that holds the people together.
5. The Algerian government is entertaining the myth before the outside world that there is still a Jewish community. This might be part of the farce.
6. What I would like to know is how one could be Jewish Christian? Only Messianic Jews describe themselves that way.

Sylvia,
I hear you.
This is a crazy story. It is not even worthy of mention and thoughts.
Roger Said was living in France way before his death, and was French. He accepted in 1990's this title of liaison between the remaining Jewish interests (as if they were genuinely there)and the Algerian Military government.

Roger was only dealing with keeping up with cemeteries (large ones, situated in Algiers, Tlemcen and Constantine). He also was negotiated with the Government to allow Jews to visit the famous Rabbi Ankaoua tomb in Tlemcen as a part of Hailoula festival. I think he succeeded one year in making this possible. However, after that one year pilgrimage which saw a considerable number of Jews (mostly from France) to travel and visit the tomb, and to which the local politicians and youth labeled it "a Jewish invasion", discontent from local officials,imams and the all mighty military leaders, put a final stop to the possibility of any future pilgrimage.