This report by Rudaw English is a turn-up for the books: it says that the Kurdish-Jewish directorate under Sherzad Omer Mahmoud Mamsani has now been 'suspended' - ostensibly for lack of funds. Readers of Point of No Return will know that we were from the outset suspicious of this enterprise in a country with no Jews. Mamsani's directorate claimed to represent 430 Jewish families, but the 18,000-member community was evacuated to Israel in 1949.  Gullible Western Jews fell for Mamsani's kitsch commemorations of events like the Farhud and Holocaust memorial day, complete with Jewish religious symbols. We were warned that Mamsani was an Iranian agent with no Jewish blood whatsoever, whose role in the abduction of the editor of the Israel-Kurd magazine remains a mystery. We may never know the real story behind the directorate's suspension. (With thanks: Boruch) 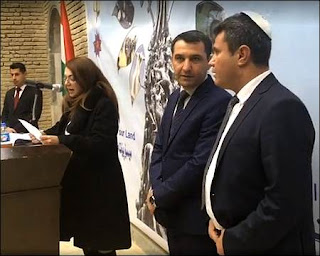 Sherzad Mamsani (second from right) at one of his commemorative events.

HEWLÊR-Erbil, Iraq’s Kurdistan region,— The official representative of the Jewish community has announced that they have suspended their representation at Iraq’s Kurdistan Regional Government’s (KRG) Ministry of Religious Affairs indefinitely for “some reasons” without giving any further details.

“Because of some reasons we have suspended our representation at the Ministry of Endowments and Religious Affairs until an undeclared time,” Sherzad Omar Mamsani announced on his Facebook page on Thursday.

The representation was opened in 2015 after the Kurdish parliament passed a law officially recognizing the Jewish community with full ethno-religious rights, along other minority religions.

Nabaz Ismail, the spokesperson for the ministry told Rudaw English that they have not been notified officially of the suspension.

Ismail said Mamsani was conducting his official duties when he last saw him a few days ago.

Mariwan Naqshbandi, a senior official at the ministry, however was aware of some issues that Mamsani raised with him as recently as yesterday, mainly about “the lack of funding” to their representation.

Read article in full
Posted by bataween at Tuesday, March 07, 2017