In the 100th anniversary year of the Balfour Declaration, Ofer Aderet at Haaretz pursues the will o'wisp of the binational state by evoking those  Mizrahi 'bridge-builders' in the 20th century who advocated a 'shared' existence in Palestine. The article is predicated on several myths. Despite superficial resemblances between Arabs and Mizrahi Jews, they have quite different values; the pre-Zionist situation was not always one of peaceful coexistence, and both sides are not equally to blame for 'hostilities' in Palestine; as the chief victims of Arab antisemitism, Mizrahim are generally more distrusting of Arabs than others. Lastly, as civil war rages in neighbouring Arab states, the 'shared future' vision of the bridge-builders seems more distant than ever. (With thanks: Lily) 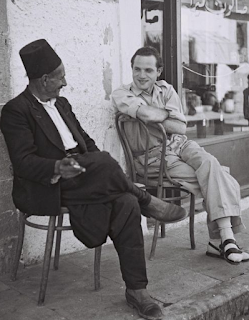 An immigrant from Bulgaria chatting to an Arab in Jaffa, 1949 (Israel GPO/Zoltan Kluger)

With 2017 marking the centenary of the Balfour Declaration, the 70th anniversary of the UN Partition Plan vote and the 50th anniversary of the Six-Day War, new historical research is seeking to shed light on some of the silenced and forgotten voices that were part of the lively Jewish-Arab discourse in British Mandatory Palestine.

“These voices spoke of another option, the road not taken, which centered on a Jewish-Arab identity. It’s important that we recognize it, particularly given today’s fragmented reality,” Prof. Moshe Naor of the University of Haifa told Haaretz last month. “We want to underscore the complexity of this debate and not let the dichotomy of ‘Arabs’ and ‘Jews’ be viewed on such a simple level,” added Dr. Abigail Jacobson of the Van Leer Institute.

Their English-language book “Oriental Neighbors: Middle Eastern Jews and Arabs in Mandatory Palestine” (Brandeis University Press) was published last December. It contains a wealth of examples of attempts at dialogue between Arabs and Mizrahi Jews – efforts that emphasized their ethnic, linguistic, cultural and geographical closeness, despite tensions between the Zionist and Palestinian movements.

The Mizrahi Jews who lived in British Mandatory Palestine – which existed from April 1920 to May 1948 – fell into three main categories: descendants of Jews who had arrived after the expulsion from Spain and Portugal; immigrants from Arab countries; and Yemenites. At the start of the mandate era, they made up 40 percent of the Jewish population. As more waves of aliyah arrived from Europe, this percentage was reduced by about a quarter.

The political, social, economic and cultural cooperation documented in the book illustrate how, at the time, some aspired to create a “New Middle East” in which Mizrahi Jews would make use of their dual Jewish and Arab identities to mediate and bridge between the two peoples and movements.

One such person was David Avisar, an educator and writer of Iraqi-Jewish origin. The organization he headed, Pioneers of the East (Haultzei Hamizrah), maintained that Mizrahi Jews had always lived with Arabs in “brotherhood and friendship,” and that “strangers are sowing conflict between us.”

In 1923, Avisar published a manifesto titled “The Arab Question,” in which he discussed the “racial and cultural affinity of the two peoples – Jews and Arabs” – and the “possibility of forging a shared life in Palestine.”

In 1929 – the year of the Hebron riots that shook Jews living in British Mandatory Palestine – Avisar published a plan for a binational state, called “A Proposal for Understanding and Agreement with the Arabs of Palestine.” He wrote that the Mizrahi Jews should directly address the Arabs, and was critical of the Ashkenazi Jews from Europe whose actions “had been taken over the heads of these masses,” without consideration for “the Arab settlement that has been in Palestine for 1,300 years.”

His plan called for the declaration of a single state on both sides of the Jordan River, in which Jews and Arabs, who share “race, creed, history, language and hope,” would live side by side.

Could an outlook such as Avisar’s, who championed cultural and social cooperation between Jews and Arabs, have done anything to prevent the escalation of hostilities between the two peoples?

The article describes david avisar as being of iraqi jewish origin. But on closer look, and what the article does not mention, is that avissar was a Palestinian jew, born in hebron to an Iraqi Jewish family who came to israel in the mid-19th century, before the beginning of zionism.

Davsil, when Mr Avisar was born, under the Ottoman Empire, there was no "palestine" as an official subdivision of the Empire. The name "palestine" was Western and was not used under the Ottoman Empire or its predecessor, the Mamluk Empire. The first Arab Empire in the Land of Israel, starting in the 7th century, used the name Filastin, Jund Filastin, Filastin military district [= jund], for only the southern part of the country, what the late Roman Empire and the Byzantine Empire had called Palaestina Prima. The Arab conquerors called the north of the country Jund Urdunn, referring to the Jordan River, and meaning Jordan military district. The Romans had called the north of the country Palaestina Secunda, but for the Arabs it was Jund Urdunn, although there is speculation that a 7th century Byzantine emperor had renamed Jordania or somesuch.
So it is not correct to call anyone in the country "Palestinian" in the 19th century, unless you are using Western terminology.

But the thesis of the Haarets writer and his informants from the Van Leer and a university, do not explain the case of Eliyahu Sassoon. He was a Syrian Jew, from Aleppo I believe, and was active in the nationalist movement there after WW One. He even edited an Arab nationalist newspaper. Yet he ended up as an Israeli diplomat, prominent in Israel's foreign ministry. Why did he leave Arab nationalism for Zionism? Maybe the answer to that question can help to explain why this notion of Avisar and others did not come to fruition.