In the 20th century Jews in Morocco can be said to have had an easier ride than Jews in other Arab countries: they have not been targeted by state-sanctioned discrimination and have benefited from the sultan's protection.  In spite of this, however,  history tells us that Jews in the ghettoes of the Maghreb suffered more pogroms than in other Arab countries:  Marrakesh (1864 -80), Tripoli (1785). Algiers (1805,1815,1830)    Taza (1903), Settat (1903), Casablanca (1907), Fez (1912).  Jews in pre-colonial North Africa had neither material nor physical security. 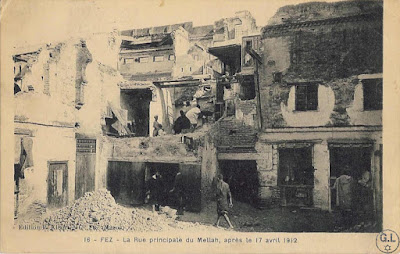 Until the colonial era permitted them to move into European quarters ("ville nouvelle") of Moroccan towns, Jews were confined to the Mellah or Jewish ghetto. This made them particularly vulnerable to mob violence, particularly during Muslim holidays.

Esther Sidon told Point of No Return: "my grandmother, Lea Azogui née Nahmani, was particularly scared of the Shishaoua Carnival, lasting almost a week. She would insist on moving her whole family to a hotel outside the Meknes nouveau Mellah until this Muslim Carnival was over. They were able to afford to pay for accommodation. The great mass of Jewish residents of the nouveau Mellah were not so lucky and had to be confined to their homes during the holiday. One year, Maurice Azogui (my father) recalls, the king had to cancel the carnival because of outbreaks of violence. The Jews were so happy."

In neighbouring Tunisia, a similar situation prevailed. The writer Albert Memmi recalls in Pillar of Salt 'the frailty of the underdog' to which the poor Jews of the Tunis Hara were exposed:

'If the pogrom never reached the plush neighbourhoods with their mixed Jewish, Muslim and Christian homes, the huge ghetto, forgotten in its sordid misery by the antisemites, was under permanent threat of death. Breaking down any door would reveal Jews behind it. Having never left this side of the Mediterranean, we felt cut off, exposed to all sorts of local disasters.'
Posted by bataween at Tuesday, February 21, 2017

Email ThisBlogThis!Share to TwitterShare to FacebookShare to Pinterest
Labels: Antisemitism, Jews of Morocco, Jews of North Africa, Jews of Tunisia