This is a song composed by Kobi Oz, a musician of Tunisian origin,'We had nothing,' for the Remembrance Day for Jews from Arab countries. The clip begins with the Nazi occupation of Tunisia in 1942 and traces Oz's family's history through the rain-soaked tent camps in Israel and the Yom Kippur war. The video clip shows Jews from Arab countries now living in Israel - including Rahel Uzan,Kobi's mother - being interviewed about their family histories. The song concludes on an upbeat note:'we managed'. As they finish telling their stories, the emotional interviewees manage a smile.
Oz appeared at a musical extravaganza celebrated in Jerusalem before an audience of 3,000 in Jerusalem. 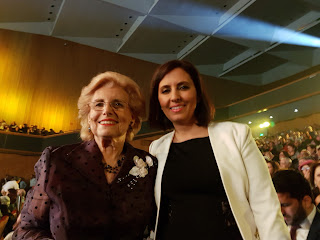 L
Levana Zamir (seen interviewed in French on i24News) ,president of the associations of Jews from Arab countries in Israel,poses with the Minister of Social Equality,Gila Gamliel, at the Jerusalem 30 November commemoration.


In her speech Minister Gamliel said that she had organised this big event in order to raise awareness of the expulsion and departure of Jews from Arab countries.

The Binyanei Ha'uma hall was packed to bursting point. Three hundred more people, who were left outside because it was fully booked, followed the proceeedings on a large screen. They stood watching for an hour and a half.
Posted by bataween at Monday, December 05, 2016