It is you, Bisharat, who hath us offended 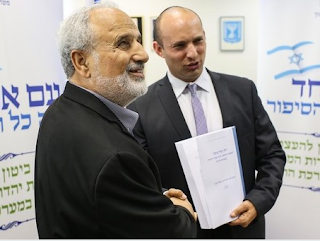 Erez Biton submitting his report to Naftali Bennett, education minister. The Biton report looked at how to insert more Mizrahi content into schools.


Jews around the world have been marking the mass exodus of Jewish refugees from Arab countries over the last sixty years. True to form, Haaretz has not a positive word to say about it. The Arab-Israeli writer, Odeh Bisharat has just published a piece titled,  If I Were a Mizrahi Zionist, I Would Be Offended.  Sadly, it is a tissue of half-truths and wishful thinking. The gist of his argument is that you can't be a proud Israeli patriot and a refugee from an Arab country at the same time. I have inserted my comments in italics. (With thanks: Stan)

Instead of adding yet another day to widen the rift between them, I would have chosen a day to express the connection between Jews and Arabs.

After 2, 500 years (about a million days) during which they resided in Iraq, the Biton Committee couldn’t find a better way to raise the banner of Mizrahim than to focus on their tragedy.

Actually the Biton Committee did not invent the 30 November commemoration, it simply recommended that this Day, which became an official holiday by Knesset law in 2014,  should be observed in schools.

As result, the ministerial panel decided that their entire illustrious history would be remembered with a day "to mark the departure and expulsion of Jews from the Arab countries and Iran," which would henceforth fall on November 30.

This is not correct. The Biton report contains a raft of recommendations for the promotion of centuries of flourishing Mizrahi culture and heritage.

First we must explain that versions of history change here according to the season. If it’s hot, a light shirt is enough. If it’s winter, you need a heavy coat, and during stormy weather at other times, you might dress differently every day.

Bisharat reduces the refugee issue to a matter of political opportunism by the Netanyahu government.

Thus, until the mid-1990s, we were taught in school about the bravery of the aliyah activists in the Arab countries, who through thick and thin and using strategies that wouldn’t have embarrassed James Bond, led to the departure – and even more importantly, to the immigration of – these Jews to the Promised Land. But when the clouds started rolling in, in the form of demands to resolve the resulting Palestinian refugee issue, the concept emerged of “Jewish refugees from the Arab states.”

In the early days of the state, Israel focused on the heroic exploits of the Zionist activists who risked their lives to rescue Jews from Arab countries. That focus actually helped integrate the refugees into Israel, and contributed to
Prime Minister Benjamin Netanyahu upgraded the concept and raised it to Olympic proportions. (...)

So now the Zionists have to explain whether the arrival here of Mizrahim was a "default" development that was the result of Arab oppression, or whether they arrived here as proud Jews returning to the Promised Land.

To focus on the 'pull' factors does not invalidate the 'push' factors. They are two sides of the same coin.

If I were a Mizrahi Zionist, I would be offended to be told that I’m living in my homeland as a refugee – and not as a proud patriot.

Jews came to Israel as refugees, but it is to the credit of the Israeli government that they are no longer refugees. To have come as a refugee and to become a proud patriot of one's new homeland are not mutually exclusive.

But the glaring truth, which cannot be glossed over either by the ruses of the right-wing leadership or Arab reactionary propaganda, is that the Jews in Arab lands played a very important role in those countries in all realms – culture, economics and politics.

True enough. But the fact that German Jewry also played an important role in German culture and society did not stop them from being persecuted and 'ethnically cleansed' by the Nazis.

The fact that these individuals were not immediately tempted when the Jewish state was founded to answer the Zionist call to emigrate there proves the degree to which they affiliated themselves with the Arab peoples.

Untrue. As soon as the state of Israel was declared, Jews in Arab countries attempted to immigrate there in their thousands. Over 90 percent of the Jews of Iraq, Yemen, Syria and Libya had moved to Israel by 1951.

A great body of evidence shows that they were neither Zionists nor anti-Zionists. Like every person seeking peace and tranquility, they simply wanted to continue living in their natural environment.

All the more reason why the governments and mobs of Arab states were at fault for scapegoating  their loyal Jewish citizens.   Most Mizrahi Jews were non-Zionists, but they were forced from their 'natural environment' by state-sanctioned oppression and violence.

The terrible tragedy occurred after the Jewish-Palestinian conflict erupted in Palestine, bringing all the so-called nationalist emotions among both peoples to the fore.

Untrue.  Israel cannot be blamed for bursts of violence against Jews in Arab countries which predated its establishment: eg the 1912 Fez pogrom, the 1941 Farhud massacre, the Libyan riots of 1945.

And when the Zionists, on the one side, linked up with Arab reactionaries on the other, with the encouragement of the British Mandate – the tragedy of the Jews in Arab countries occurred.

Now there's an interesting piece of revisionism. What Arab 'reactionaries' did Zionists link up with? The Grand Mufti of Jerusalem, whose declared aim was the extermination of the Jews not just in Palestine, but across the Arab world? And what 'encouragement' did the British furnish?

It’s hard to estimate the “contribution” of each side to this tragedy, but this “joint effort” wreaked havoc not just on the Jews, but on all the Arab nations, which lost their best and brightest.

In sum, the Zionists share the blame for the Mizrahi tragedy, even though their leaders accepted the Peel Commission Partition plan, the UN Partition Plan, and that Chaim Weizmann declared,'we will accept a Jewish state even if it were the size of a tablecloth'? Clearly Bisharat has a shaky grasp of history and does not recognise that the Arab position,  a maximalist one rejecting a Jewish state in any borders, caused the Mizrahi tragedy.

The unfortunate thing is that while we are witnessing the rise of Arab intellectuals who are sharply critical of the leadership in Arab states for abandoning the Jews, in Israel the opposite is happening. That’s why I am critical of my brethren on the Biton Committee, headed by poet Erez Biton, who instead of using the Jews of the East to help forge a connection between Arabs and Jews, chose to fan the flames.

There are plenty of days here for hatred. That’s why instead of adding yet another day to widen the rift, I would have chosen a day to express the connection between Jews and Arabs, whether it was the birthday of a poet, or the date of an event by means of which Jews left their mark on Arab culture.

Some Arab intellectuals, in Iraq and Egypt for instance,  are indeed beginning to come to terms with their countries' antisemitism - the Farhud, for instance.  They are recognising that their Jews were exposed to violence and persecution. They are more honest than Bisharat, who wishes to bury his head in the sand. He would rather talk about poetry than persecution.  Far from fanning the flames, the Biton commission and the campaign for Jewish refugees from Arab countries wishes to restore truth and balance to the historical record. You can't build peace on a lie.

the logic so often used by Arab polemicists is offensive and deceptive. Such as playing with the definition of the word "refugee." By his logic, the palestinian Arabs who found refuge in Arab lands, like Jordan, Syria, etc, are not really refugees because these lands were also part of their homeland or fatherland [watan]. This principle is stated in Article One of the PLO charter which says that the palestinian Arabs are part of the Arab nation and that "palestine" is part of the Great Arab Fatherland [watan].

It is also offensive how they always seem to avoid any guilt or responsibility on their own part, on the part of the Arabs or Muslims, for anything that went wrong. Bisharat, although his name seems to indicate that he is a Christian, follows this rhetorical and (im)moral principle.

another complaint about Arab polemicists is their propensity to do hair-splitting. A refugee is not a refugee if he becomes a patriot of the land of refuge, etc.

Another thing that annoys me in Bisharat's screed is his sanctimonious pose of love of peace, and his hatred of hatred. If he hates hatred, then why does he not speak up against the hatred of Jews spewed out daily by the Palestinian Authority and Hamas through their respective mosques, TV, radio, newspapers, "universities," schools, etc.
" I am critical of my brethren on the Biton Committee, headed by poet Erez Biton, who instead of using the Jews of the East to help forge a connection between Arabs and Jews, chose to fan the flames. There are plenty of days here for hatred. That’s why instead of adding yet another day to widen the rift, I would have chosen a day to express the connection between Jews and Arabs"

What's more, "Bisharat has a shaky grasp of history" and "You can't build peace on a lie." He omits mention of the dhimmi status of Jews in Arab/Muslim lands for more than 1000 years, as well as the massacres that you mention, Morocco in 1912, Iraq in 1941, and Libya in 1945, to which we may add pogroms in Egypt in that same period. Of course, since this hypocritical drivel comes from an Arab "writer," then Haaretz is happy to publish it.