Israeli music loses one of its greats: Ahuva Ozeri 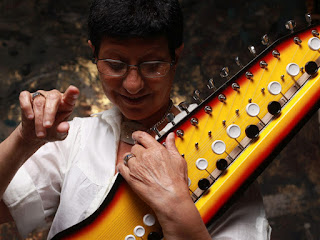 Ahuva Ozeri playing the bulbul tarang. She lost her voice to cancer

The Israeli music world has just lost one of the greatest, most original voices heard  in the last 40 years, declares Haaretz.

Ahuva Ozeri had an important role, akin to that of a founding mother, in the rise of Mizrahi music (originating in Arab countries) in Israel since the mid-1970s. In recent years she enjoyed the status of a musical heroine, as well a social and gender leader. Her stubborn fight against cancer and the fact that she continued to create even after her vocal cords were excised in 2000 added a heroic dimension to her character and work.

But above all these impressive facets came the fact that Ozeri was a unique and great musician. She left behind some wonderful songs and an artistic language that was uniquely her own.

Ozeri was born and raised in Kerem Hateimanim (Yemenite Quarter) neighborhood of Tel Aviv, the youngest of eight siblings. Her father died when she was four. She started singing at a young age, sometimes serving as a wailer at memorial services. From the age of 13 she started singing at parties, in which she appeared with the Shovalim band, which later inspired other bands such as Tzlilei Hakerem (Sounds of the Kerem) and Tzlilei Ha’Oud (Sounds of the Oud). The parties would start at eight in the evening and end before dawn.