Never shy to bash Israel's right-wing, Ruth Margalit in the New York Times paints this somewhat unflattering portrait of Miri Regev, culture minister in the curent Netanyahu government.But Regev is more than a minister, she is leading a cultural war against Israel's highbrow Ashkenazi elite. It is a war where the NYT is firmly on the side of the elitists. See my comment below (with thanks: Henry):

The Tel Aviv Museum of art is a somber slab of concrete built in the no-fuss brutalist style of the late ’60s. The architect who planned the museum also designed Israel’s nuclear reactor; such is the overlap between culture and political exigency in the country.

One Sunday in March, a throng of artists, actors and writers clustered in the museum’s main auditorium. They were awaiting the arrival of Miri Regev, Israel’s culture and sports minister, of the ruling Likud Party. A year earlier, Benjamin Netanyahu, Israel’s prime minister and the chairman of Likud, secured a fourth term in office and swore in his ministers, a coalition widely regarded as the most right-wing in Israeli history. In that time, Regev has done just about everything she can to alienate and enrage those she considers the elites, or the “cultural junta,” of Israel. Leftists. Secularists. Tel Avivians. Ashkenazim — Jews of European origin. People who, as she told me recently, think that “classical music is better than the Andalusian music” of Morocco, or that “Chekhov is more important than Maimonides.” 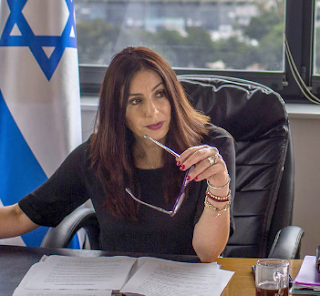 Regev, who is 51, grew up in Kiryat Gat, a development town in Israel’s south, which — like many other towns in Israel’s peripheria, or periphery, the areas outside the country’s urban center — was set up in the 1950s to house the influx of Jewish immigrants from Muslim countries. In person she is warm; after two minutes of conversation she will call you kapara (“sweetheart” in Jewish Moroccan dialect) or neshama (“soul” in Hebrew). Yet in public life she comes across as crass and hotheaded.

That afternoon in the museum, she was venturing into hostile territory. She had agreed to speak at an arts-and-culture conference organized by the liberal newspaper Haaretz to address the interplay of state funding and cultural production. Many of those in attendance wondered if Regev had come to make amends: Shortly after her appointment, at a meeting with stage actors and guild representatives, Regev all but acknowledged being driven by a sense of political vendetta. “We got 30 seats” — in the Knesset — “you got only 20,” she told those present. She later gave an interview in which she called the Israeli creative class “tight-assed” and “ungrateful.”

When at last Regev materialized, wearing an all-black ensemble and crimson lipstick, a murmur swept through the auditorium. She is a striking, fiery presence with wide-set eyes, prominent lips and dark hair streaked with reddish highlights. Standing in front of the audience, her expression set between a smirk and a scowl, she clutched the lectern with one hand. “I was always told to start a speech with a quote; it makes for a cultured impression,” she began. “So here goes. As the famed Chinese philosopher Sun Tzu once put it” — she switched to accented English — “Cut the bullshit! Cut the bullshit!”

My comment: The article's title: the Commissar of Culture" tells you all you need to know about Miri Regev. Vulgar, unsophisticated, she is a stalinist and a populist, an opportunist who would have joined any party just to gain power. She rose through the ranks of the military as a censor. Her role as culture minister is therefore 'Macarthyist censorship' - politicising the funding of art in order to promote her own pro-settler, anti-Arab, 'right-wing' agenda. The NYT can no longer brand theMizrahim as the victims of the Ashkenazi establishment.Suddenly, they are the establishment.  One would have expected the leftist New York Times to support Regev's anti-elitist revolution: but no, the reporter sees her as reactionary and anti-Palestinian. There is little attempt to understand how her Mizrahi background has shaped her views. She is seen fraternising with the wrong kind of Arab - not the 'moderate' MK Ayman Odeh, for whom Shimon Peres was not enough of a peacemaker for Odeh to turn up at his funeral - but the kind who are willing to reach an accommodation with the Zionist state.

Not for nothing is it called "Pravda on the Hudson."

The degeneration of the NYT into an anti-Israeli propaganda sheet continues unabated. Smearing and defaming those it opposes, whitewashing and dripping sycophancy towards those it supports, its reporting is driven not by a desire to inform but by a determination to indoctrinate and brainwash. And the Washington Post, Boston Globe, Los Angeles Times and others are not far behind. Today all the US broadsheets speak with one voice, and together with the TV networks (except for FOX) impose a monopoly over discourse in the media that makes the long-gone and unmissed Soviet media look good in comparison.

Although I am really ignorant of the Mizrahi and Ashkenazi rift in Israel proper (because I do not live there). Ignorant more specifically about how it is experienced and felt in the micro-politics arena. I believe the problem is not the newspapers themselves per se. It is the few editors and their assigned muffled journalists who monopolize the narrative about the Israeli politics.

The real issue here in the US is the all powerful and well established Eastern European Jewish Diaspora with its deeply rooted leftist tendencies, which have now become almost written in stones. The Mizrahi Jewish diaspora is minuscule and does not voice its opinions, perhaps for fear of the "old mighty" secular as well as the religious Ashkenazi establishment. It will take perhaps one or two generations for the like of Miri Regev to emerge on these Eastern shores of the Hudson river, in order to scream out loud about the inequities that have befell the Mizrahi culture in the past and to which it is currently being minimized and ridiculed. With it, one can only hope for an ushering of the new dialogue about this issue.

The NY Times is representative of the old guard and anti-Zionist German Jews who looked with contempt on the "uncivilized"
Yiddish speaking masses who reached this shore. There are rifts in Israel to be sure between Jewish diaspora groups. And ironic that East European looked askance at Mizrahi Jews.
Eastern European Jews do tend left....liberal...as I prefer to call myself. The left and far left in Israel as here are strident in their anti Israelism and willingness to contort and distort the historic record to suit their world view. Miri Regev is understandable and I'm very sympathetic towards Mizrahi voices in Israel and in this country. But let's stop the bickering among ourselves and appreciate what each brings to the Jewish mosaic. We are too few.