US Jews 'take in Syrian-Jewish refugees' 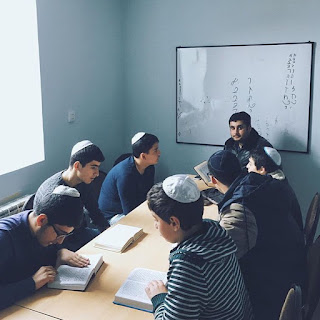 Update: the local Louisville JCRC has denied the news, stating: "this rumour is false. We resettled one Syrian family but they are, most assuredly, Muslim. "

A small Jewish community in the USA has reportedly secretly taken in three Jewish families from Syria.

Point of No Return has learnt that a Conservative synagogue in Louisville, Kentucky, has allegedly worked with the local and federal government to allow the families - 13 people in all, including seven children - to emigrate to the US.

The families had been living in Damascus until four months ago. They entered Sweden as Christian refugees. They are described as able to speak several languages and were well-to-do, having done business with the Assad regime.

Louisville, which has one of the US's largest refugee centers,   has a population of about 7, 000 Jews. Most are Reform and all the synagogues are Ashkenazi.

Impressive. I have at times considered moving there. The closest Sephardi synagogue is in Indianapolis.

thanks for reporting this important story.....hope they find ways to integrate and to pray comfortably - I'm sure it will be challenging, but they'll be better off in the long run

why were Jews working with the Assad regime? What were they doing with him? Are they still well to do?

I was excited to read this article and I would be happy to contact the writer or one of the refugees for further questions.

Thank you and good day

shalom, I am a writer for a local newspaper in Cincinnati. How can I contact this synagogue? What are the names of the refugees? What are the ages?

Yael Farag, ladies and gentlemen:
"I'd like to see some analysis, or preferably a comment from one of the Jewish community's organisations, about the relationship between Antisemitism and the actions of the state of Israel. The evidence makes it clear that there is a link - the spike in attacks on Jews during the Gaza war - but nobody seems willing to try to understand or interrogate this. It seems to me that when Israel acts with murderous violence against the Palestinians, it's bad for those of us in the Jewish community worldwide - unless, that is, we actively disassociate ourselves from the actions of the state of Israel."

I think the attacks are higher still in Europe this year but there is no Gaza war.

Is there a program in Israel that allows Jewish families escaping war or persecution in middle east or elsewhere to seek refuge? Would it not have been far easier for this family to go to Israel?

Syrian Jews were allowed to leave the country on condition that they didn't go to Israel, as Hafez al-Assad didn't want to "reinforce" his archenemy with potential soldiers.

You are a traitor to your own people and davar rishon you can first shove it where the sun won't shine and I am a proud Lebanese born Jew .

My opinion is that this story DOES NOT MAKE SENSE because the Syrian jews have a large community in BROOKLYN and every one knows every one else meaning they know about each other which will take us to the common sense of Supposedly those Syrian jews would have contacted there fellow Syrian jews in Brooklyn.
Secondly, for the picture to make sense on the subject of Syrian Jews, the children in the picture would be reading traditional hebrew book and as stated in the blog that there is no sephardic synagogue near by and the common sense as a jew theses hebrew books are Eshkenazi books which those SUPPOSEDLY jewish Syrian people would not be easily able to read.
It is a make belief story and I wonder THE MOTIVE ???
Naji Majdalani u should check the truth on this posting before u subject it to all of us. It is the least of ur respectful RESPONSIBILITY

The jewish community denied the story

Ben
Just because the Syrian Jews have a large community in Brooklyn does not mean that these refugees want to join them, or indeed that they have any choice in the matter. It is possibly a condition of their being admitted to the US that they should go to Louisville, which has one of the largest refugee centers in the country.
The article states that the refugees were accepted by a conservative synagogue, so it makes perfect sense that the children should be studying the 'Ashkenazi' way. In fact, Hebrew is Hebrew whether you are Ashkenazi or Sephardi.
The Jewish community may have their own reasons for denying the story. This does not make it untrue.

strange as it may seem, Hafiz Assad in Syria protected the Jews in Syria to a certain extent while excoriating Israel all of the time, and preventing the Jews from leaving. Assad even did some favors for the Jewish community which were helpful if not necessary in the police state that he had created. The non-Sunni communities in Syria, Alawites of course [the Assads are Alawites], Druz, Shiites, various Christians sects, including Armenians, plus the Kurds who are usually Sunni but not Arab, and the Turkmans [whose sect I don't know], have all either supported Assad's side in the civil war or been neutral [the Kurds, at least up till the last month]. The Sunni Arabs in Syria make up about 60-70% of the population and the others have feared them for ages. No doubt with good reason. Hence, their support for and neutrality towards the Assads.

Why would these families have supported Bashar, though?

Mr. Anonymous.....paraphrasing from Eliyahu's comment above
a - he was "preventing the Jews from leaving"
b- they were aligning with the govt in power to avoid the Sunni "problem"

I imagine it was a life of finding the path of least resistance (or leave the country, which I guess they all almost finally did)

Amen. Perfectly expressed. My thought is that if it is true is that they were either collaborators or possibly not even Jewish but playing that angle to get to the US faster.

The story is highly questionable and if at all accurate it is deeply tragic. So called "Conservatives" are Apikoros just like all adherents of Post Haskalah Ashkenazi Assimilationist movements. Denying the Devine origin of the Torah and rwjecting even a single one of the 613 Mitzvot makes them full on Apostates.

That said I do not believe the story. The Syrians have a huge community in Brooklyn and Deal, New Jersey and has always absorbed newcomers- even when outsiders like the Ashkenazi woman in Canada snuggled them our.

The only way I can see it being accurate is if they were collaborators or else are just claiming to be Jews thinking it will help them get to the States faster.

My Iraqi acquainaces arrived in the US in 2012. They are Shia, with some Jewish ancestry. They tell me that were they to have declared themselves as Jews, they would no longer be welcome to return to Iraq.
So, I doubt someone would assume a Jewish identity to fastrack refugee status. That the newcomers are not seeking out a Sephardi community indicates to me a lack of familiarity with Jewish practice: an American Conservative Jewish environment includes Hebrew liturgy along with our innovations of equality across sexes and genders wrt marriage and leading prayers.
--malca

Another fabrication to be filed in the "Muslim on Muslim hate" department, right next to "Saud Arabia compensates descendents of 7th century Arabian Jews", or the story about the Tunisian Minister photoshopped exchanging kisses with Jewish pilgrims when all parties denied it ever happened, or the Moroccan TV presenter whose face was photoshopped on a woman's body holding a Hebrew book on the background of the Kotel, when she denied having ever been in the region... All this got valuable accreditation from this or other Jewish sites.

Here, someone is spreading a rumor that a Muslim family living in a Syrian refugee camp of all places are in fact crypto-Jewish, who joined a Conservative synagogue, and now they have this article and a picture of an all-Sephardi all-boys class who knows where to prove it.

And if that doesn't get them killed or send them on the run, the charge that they worked for Assad might.

Not to mention the danger incurred to the synagogue itself by all this publicity.

This message is directed to "bataween" - it is not directed at the current topic, but to a blog posted on April 1 2007 by "bataween" entitled "From Cairo to Omaha - an Egyptian Jew's story" .

In this post, "bataween" cites the following:
On Aug. 8, 1962, Helene Avigdor was 13 years old. She lived with her parents, an older sister and a younger brother in Cairo, Egypt. “I came home that day and I saw the luggage by the door,” she explained. “My father kept us in the dark, and until that moment, I didn’t know we were leaving Egypt.” Helene tells her story in the Omaha Jewish Press."

My purpose in writing this is my desire to try to get in touch with Helene and/or her family...her father and mine worked in the same company in Cairo. I have been unable to find the Omaha Jewish Press story, since their on-line archives don't go back that far. Anyone who has any leads about Helene (it appears she lived in Nebraska, but perhaps under a married name.

Thanks to all,
Ed Shalom