Why do people ignore or deny The Farhud?

The 1941 Farhud, coming as it did seven years before Israel was established, shatters the myth of peaceful coexistence between Jews and Arabs, explained Rabbi Andrea Zanardo to his Brighton congregation:
Ask anyone what the Holocaust was, and everyone will reply: it's the massacre of six million Jews during the Second World War, at the hands of the Nazis and their collaborators. Ask any Jew what the Shoah was, and every Jew will give more or less the same answer. We know what the Holocaust was; we know what the Shoah was. But ask anyone, Jew or not Jew, what the Farhud had been. Most likely you will not get an answer. Very few people, Jews or Gentiles, are familiar with that tragic page of Jewish history. 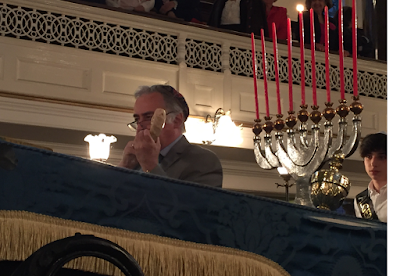 Malcom Miller blows the shofar at the 75th anniversary commemoration of the Farhud in London on 2 June 2016
On 1st June, 1941, after the failure of a plot against the pro-British monarchy, Iraqi fascists, (many of them soldiers, or members of the police), decided to exterminate the Jewish population of Iraq. They were easy to find, because it was Shavuot and all the synagogues were packed. Fascists, criminals, (and the various overlapping of the two categories), killed adults and children, raped girls, decapitated babies, burned houses, looted synagogues for two days, until finally the regular forces acted to restore order. That was the Farhud: the beginning of the end of the Iraqi Jewish history, much like the Kristallnacht has been the beginning of the end of the most glorious page of German Jewish history. And as much as the German Jewish history had been glorious, so had the Iraqi Jewish history been great: the Talmud, for example was written in Iraq.
But, just as Kristallnacht, the Farhud was only the beginning. From 1947 the Jews have been forced to "donate" to Palestinian Arabs. From 1948 Jews were deprived of the right to testify in court. Zionism was outlawed. And because every Jew was considered potentially a Zionist, houses were continuously searched by the police, properties confiscated. Charged of cooperation with Israel, the leaders of the Jewish community were hanged, their bodies left exposed for hours, while the crowd was celebrating. The Jewish employees in the State administration and offices, thousands of them, were all fired in one night. The once prosperous Jewish community was now reduced to starving, Rabbis were abused in the streets, laypeople were harassed, and of course the Jewish businesses were boycotted.
That was the end, as I have said, of the most prosperous and established Jewish community in the Middle East, the one that had produced the Talmud. There is only one difference from the Kristallnacht. For the Jews living in Germany it was very difficult to find a place to take refuge from the advancing fury. At least the Iraqi Jews had a place to go, which was Israel. They went to an incredible length in order to welcome, and feed, the Iraqi refugees along with many others who, in the 50s, were flooding into the Country from the whole of the Middle East. Nonetheless, the Farhud is a tragedy of monumental dimensions and has become the symbol of the persecution of the Mizrahim, the North African and Middle Eastern Jews, who had been subjected to pogroms, massacres and dispossessions by the hands of Arab nationalists, from the 1920s up until the Six Day War. But official commemorations are quite recent. Only a few years ago the anniversary of the Farhud has been inscribed into the Israeli official calendar as a day of remembrance and mourning: June 1st-2nd, two days ago.
There are various reasons as to why it had not been commemorated in the same way the Kristallnacht had been. Most of the survivors were eager to integrate themselves into the new State, to become Israelis and not to cultivate their Iraqi Jewish identity, somehow separated from the rest of the society. During the Cold War, Leftist academics followed the USSR diktats, according to which the Farhud and similar antisemitic massacres were part of the heroic fight against colonialism: even nowadays, for those people every Jew is a coloniser or a "settler".
But the main problem was something else: too many people deluded themselves with the myth of the Golden Age, the legend of a peaceful coexistence between Arabs and Jews, (or rather: the comfortable existence of the Jews under the Arab rule). According to such a narrative, Muslims and Jews got along together easily and in harmony, until one sad day in 1948, an evil, Westernised form of nationalism, Zionism, came onto the scene to shatter that idyll of coexistence and peace. Things are obviously different.
But if you listen carefully to the voices of the anti-imperialist Left, those who blame Israel and Zionism for everything, you can hear echoes of that legend. After all, they ask, why do the Jews need a State, when their life was so peaceful and prosperous under the Muslim rule? The Farhud happened in 1941, well before the establishment of the State on Israel. It was the outcome of the fascination for the Nazis, by Iraqi nationalists, who were extremely receptive to the anti-Semitic propaganda aired by Radio Berlin, in Arabic, since 1933. The Gestapo had an office in Baghdad. Iraqi nationalists and German Nazis exchanged visits and marched together, two anti-Semitic youth movements, carrying on (literally) the same torch in lugubrious parades. Just like in Germany, three decades earlier, the Iraqi society had not been able to halt the growth of that Anti-Semitic movement. Rather, anti-Semitism became part of the official ideology of the Iraqi regime, once the Country gained independence.
To this day, anti-Semitism is still well spread in the Arab world, in the Arab societies. And commemorating the Farhud is tremendously unpopular, especially for those who delude themselves, imagining a rosy coexistence between Arabs and Jews, and blame Zionism and Israel for its failure. Nonetheless it is our duty to remember that tragic page of Jewish history and to pay honour to the victims of that massacre.
It is our duty, as Jews and as human beings, to remember the public opinion in the UK, and in the whole world, the hundreds of thousands of Jews, from Northern Africa and from the whole Middle East. They have been victims of anti-Semitic hatred. They still wait for justice and reparations. Their voices deserve to be heard.
Sermon delivered at Brighton and Hove Reform Synagogue, 4 June 2015
Posted by bataween at Saturday, June 04, 2016

several perceptive points made in Rabbi Zanardo's piece. The Left, at least Leninist, pro-Soviet Left and the Trotskyists as well, did not want to besmirch the anti-colonialist good name of the Arabs, with any mention of their oppression of dhimmis and participation in the Shoah. But major Western powers, especially in the 1940s and 1950s were pro-Arab and thus implicitly anti-Jewish. In the UK, Chatham House and its journal, International Affairs, conducted an anti-Israel, anti-Jewish and anti-Zionist crusade, necessarily whitewashing Arab history's dhimmi persecution and Nazi collaboration.
In the US too, the State Dept and the newly created cia (1947), as well as most of the oil industry politically supported the Arabs. The journal of the oil-industry financed Middle East Institute, Middle East Journal, of course supported the Arabs politically and so did ARAMCO separately [Arabian American Oil Company].
So it was not only the Left that wanted to have the Farhud forgotten. The Left found itself in agreement with the major Western imperialist powers, except for France, which was mildly pro-Israel from 1948 to De Gaulle. He changed France policy to be pro-Arab and the Left saw this as anti-imperialism on his part.