Thanks to two Israeli activists, World Refugee Week did not pass without a mention of the neglected million Jews driven from Arab countries before and since the creation of Israel.

In a 16-minute report on the i24 News Channel on 23 June, Dr Edy Cohen and Golan Barhoom put the case for the Jewish refugees and the millions they had lost in property and assets.

The two men, orientalists from the organisation Kedem, had  helped organise an event in May to highlight the plight of Jewish refugees called The Jewish Nakba. When the programme presenter, Tal Heinrich, suggested that nakba was somewhat provocative, Golan Barhoom said that word spoke to the Arabs in their own language. 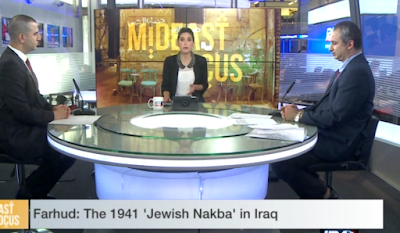 Dr Edy Cohen and Golan Barhoom explained that an era of Arab-Jewish coexistence had come to an end with the rise of Nazism and the rise to power of the Grand Mufti of Jerusalem. Both the Nazis and the Palestinian Arab leader had a common enemy, the Jews.

The US author Edwin Black, who had earlier this year led 75th anniversary commemorations in four cities of the pro-Nazi pogrom known as the Farhud, interjected to explain the background to Arab-Nazi wartime alliance.

The i24 News report featured a clip from the London Commemoration by the Israeli ambassador to the UK, Mark Regev. Regev said that there had been far too many Arabs who identified with Nazism's aims. To hear Mr Regev's remarks in full click here.

The report ended with an extract from a British film to be released in October 2016: Remember Baghdad: the journey of Iraqi Jews, directed by Fiona Murphy.
Posted by bataween at Friday, June 24, 2016