Update: (from Elder of Ziyon blog):

Representatives of the Jewish community in Tunisia are presenting a request to the Truth and Dignity Commission (Instance de Vérité et Dignité) to investigate institutional abuse of Jews in Tunisia from 1955 to 2013.

The filing demands an investigation into "abuses and violations and other illegal acts suffered by the Tunisian citizens, whose only fault is that they are affiliated with the Jewish religion, since independence."

The Commission was set up in 2013 to address these sorts of complaints from citizens.

The complaint lists various examples of abuse suffered by the community, such as losing their citizenship and losing their property.

********
Well-meaning westerners perpetuate the myth that all is - and has always been - well with the Jews of Tunisia. But Tunisia's rapid cleansing of its Jews has been a catastrophic failure, argues Lyn Julius in the Huffington Post:

In May this year, 2,000 foreign tourists, accompanied by hundreds of journalists, converged on the Tunisian island of Djerba. The visitors had defied Israeli security warnings in order to take part in the Lag Ba’ Omer pilgrimage to the ancient Al-Ghriba synagogue (pictured). 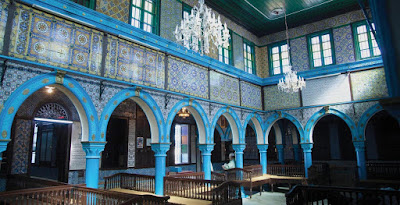 The Tunisian authorities had taken extraordinary precautions to protect the pilgrims. Armed police were everywhere and a helicopter hovered overhead. The last thing Tunisia could afford was a terrorist attack. Last summer’s atrocity, when Islamist terrorists combed the beach at Sousse picking off sunbathing tourists with machine guns, was uppermost in their minds. And the Al-Ghriba itself had been bombed in 2002, with the loss of two dozen lives, almost all German tourists.
The Al-Ghriba synagogue is a magical place of arching pillars clad in tiles of every shade of blue. Legend has it that the first Jews to settle on Djerba, 2,500 years ago, brought with them a stone from Solomon’s Temple in Jerusalem, now preserved in the synagogue.
One of the modern-day pilgrims was a rabbi from England: Liberal Judaism’s senior rabbi, Rabbi Danny Rich.
As well as visiting Al-Ghriba — the oldest synagogue in Africa — Rabbi Rich met Tunisian government members.
“Jews have lived successfully in Tunisia for centuries and the authorities seem determined to ensure that the ancient Jewish communities in Djerba and Tunis are both safe and able to thrive,” Rabbi Rich told the Jewish Chronicle.
His words must have been music to the Tunisian government’s ears.
Yes, Jews had lived in Tunisia for centuries - indeed there were 105, 000 in 1948. But Tunisia had failed miserably to hang on to its Jewish community - just 1,000 still remain, most in the enclave known as Hara Kbira on Djerba. By anyone’s reckoning, Tunisia’s rapid cleansing of its Jews is a sign of catastrophic failure. Tunisian Jews have been departing in waves over the last 50 years.
The latest wave was in June 1967, following the Six-Day War between Israel and its Arab neighbours. About 100 Jewish-owned businesses in Tunis were attacked and looted. The Great Synagogue, on the Avenue de la Liberte, was ransacked and set on fire. Rioters called out to “throw the Jews into the sea” and to burn them. Some 13,000 Jews took the hint and fled - many with nothing but a suitcase.
Numbers continued to dwindle and families left Djerba in the wake of the Arab Spring, which broke out in Tunisia in 2011.
But well-meaning westerners such as Rabbi Rich perpetuate the delusion that all is, and always has been, well. Tunisia is desperate to boost its fragile economy and image as a tourist destination, its Number One industry - and Rabbi Rich is all too willing to play the game. The Al-Ghriba pilgrimage is the highlight of the tourist calendar, bringing much-needed tourist dollars to the island of Djerba and filling its hotels.
While in Tunisia Rabbi Rich attended a conference at which the Minister of Culture promised support for a museum of Tunisian Jewry.
Few can argue with that. Except that if numbers continue to decline, the Museum of Tunisian Jewry may end up as nothing more than a forlorn reminder of Hitler’s project to establish the Museum of an Extinct Race.

Netanya reminds one of Sousse (Harissa - French: with thanks: Michelle)
Posted by bataween at Tuesday, June 14, 2016