A sluggish economy and few opportunities for women, together with security concerns, are persuading the small Jewish community of Tunisia that they have no future there. Even Perez Trabelsi, the Djerba community head, has arranged for the bones of his ancestors to be transported to Israel. Excellent report by Radio Free Europe | Radio Liberty: 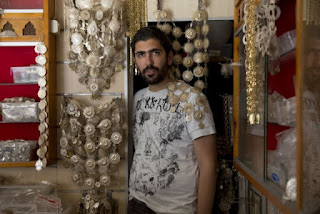 Elian Haddad, Djerban jeweller: I'd  move to Israel if business gets worse

Hundreds of Jews who moved away over the past five decades have taken their relatives' remains with them, leaving only these slabs of Hebrew-inscribed marble behind.

"There are bones that are 80, 90 years old. When you lift them up, they can break," said Yossif Sabbagh. The 42-year-old local helps exhume about a dozen bodies each year for transport to Israel, where the majority of Tunisian-born Jews have moved, and where they want their ancestors to move, too.

The flight of the dead seems to portend a bleak future for the Jews of Djerba, who trace arrival on this island to more than two millennia ago, after the sacking of the First Temple in Jerusalem in 586 B.C. More Jews arrived after the Spanish Inquisition and from Morocco, Algeria, and Libya.

They were once the traditional, observant branch of a vibrant Jewish community that numbered 100,000 across Tunisia. But the 1,100 Jews in Djerba are nearly all that are left after most others fled persecution between the 1940s and '60s.

Those who remained have been rewarded with new growth thanks in part to an emphasis on large families and patriarchal values. But the community now faces another challenge: Jewish women chafe at their restrictions and men suffer from the battered Tunisian economy.

Moving to Israel, where as Jews they are entitled to automatic citizenship, could resolve both issues but could also bring an end to one of the last Jewish societies in the Arab world.

Reproduced in the Guardian
Posted by bataween at Tuesday, June 21, 2016

Baruch Hashem, all Diaspora Jews should do the same. I cannot imagine being buried in another land. Even if you live there your whole life you still only have one true homeland, HaEretz.