The world knows nothing of ethnic cleansing of Jews 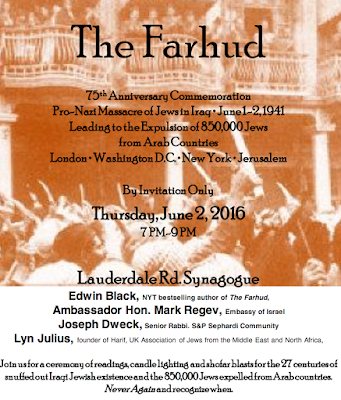 This week Jews around the world are commemorating the 75th anniversary of a pogrom which devastated the Jewish community of Iraq and led to the ethnic cleansing of 850,000 Jews from Arab countries. Zvi Gabay explains in the Jerusalem Post. (with thanks: Imre)

During Shavuot Iraqi Jews will commemorate the 75th anniversary of the farhud – the cruel and bloody riots that took place on Shavuot (June 1-2, 1941) against the small Jewish community of Iraq.

In the riots, reminiscent of Kristallnacht in Germany, 179 Jews were murdered, hundreds more wounded and much Jewish property looted. The memory of the riots remains fresh in the minds of the Iraqi Jews in Israel and abroad.

Similar attacks occurred against almost all Jews who lived in Arab countries. The Jews did not declare war on their hosts. They never fought against them, as the Arabs in Mandatory Palestine fought against the Jewish settlements and afterwards against the nascent Jewish State of Israel.

The world has heard a great deal about the injustice that happened to the Palestinian Arabs, under the code name “Nakba,” or “catastrophe,” but knows almost nothing about the wrongs committed against Jews in Arab countries. What happened in Iraq and the rest of the Arab countries was in effect an ethnic cleansing of the Jews. Jews were forced to leave behind their personal and communal properties ,including schools, hospitals, ancient synagogues, cemeteries and prophets’ graves (some of which are being demolished now by Islamic State). The Arab governments confiscated all Jewish property.

While the Nakba is marked every year with demonstrations and wide media coverage, the Jewish disaster does not merit any public or media notice. This despite the fact that its human and physical dimensions were larger than the Nakba (the number of Jewish refugees forced out of their homes was about 856,000, while the Arabs who left Mandatory Palestine numbered about 650, 000 according to UNRWA statistics).

On Thursday 2 June 2016 Harif will be livestreaming the Official London Commemoration of the 75th Anniversary of the Farhud. Tune in to the Harif Facebook page at approx 7. 45 pm (BST).

How the expulsion of its Jews backfired on Iraq

Email ThisBlogThis!Share to TwitterShare to FacebookShare to Pinterest
Labels: Holocaust in Arab and Muslim lands, Jewish refugees, Jews of Iraq