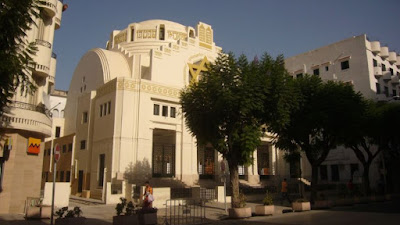 
Anti-Jewish riots broke out in Tunisia on 5 June 1967. Although no deaths resulted, the Jews took the hint - and 13, 000 Tunisian Jews left within the year. David B Green writes in Haaretz (with thanks: Lily):
Unlike other Arab and Muslim states, which effectively expelled their Jews in the period surrounding Israel’s establishment, Tunisia went to some lengths to keep its Jews from leaving. There were several waves of departures, but they had more to do with the overall policies of the revolutionary government of Habib Bourguiba than with explicitly anti-Jewish actions.

Bourguiba (1903-2000), who became president when Tunisia was granted independence from France, in 1956, was a benign dictator who was determined to modernize the economy and society. Among other moves he eliminated the Ottoman-era system that gave significant powers of self-rule to protected religious communities and dissolved the rabbinical courts. He also ordered the unification of the country’s network of Jewish organizations into a single “Jewish Religious Council,” whose members he appointed. And, under the pretext of slum clearance, the Jewish Quarter in Tunis was bulldozed under.

Though he reduced Jewish autonomy on one hand,  he allowed Jewish organizations to operate freely in the country, encouraging aliyah in the two years prior to the Six-Day War, Bourguiba had seen relations with the other Arab states, in particular with Nasser’s United Arab Republic (Egypt), deteriorate, because of what was perceived as his conciliatory attitude toward Israel. In February 1965, he took off on a tour of the eastern Mediterranean states, in which, while he expressed support for the Palestinians, he also preached for a policy of realism: He did not believe the Arab world should go to war against Israel, and he hoped for a peaceful solution to the conflict, one with “neither victor nor victim."

Bourguiba’s approach was not adopted by his Arab brethren, and Nasser especially was determined to characterize him as a Western lackey and traitor to the Arab cause. There were even violent demonstrations in Cairo against Tunisia, and an attack on its embassy.

According to historian Yaroslav Bilinsky, the Tunisian people supported Bourguiba’s approach, at least tacitly. Until June 5, 1967, that is. That afternoon, thousands of residents of Tunis began a rampage, directed mainly against the city’s Jews.

In total, about 100 Jewish-owned businesses attacked and looted. A number of cars were overturned as well, and the Great Synagogue, on Tunis’ Ave. de la Liberte was ransacked and set afire. Rioters called out to “throw the Jews into the sea” and to burn them. Also attacked were the British and the American embassies.

The rioting lasted up to six hours, during which time, the police apparently took little action to bring it to an end. It was said that Bourguiba himself was only told about the violence that evening.

On the evening of June 5, the president appeared on national radio and TV. In the main, he spoke about Tunisia’s solidarity with its Arab brethren in the war, and its readiness to provide logistical support and even send forces to the front – promises that became irrelevant when the war ended after six days. At the same time, however, he condemned the idea of taking anger with Israel out on Tunisia’s Jews. He referred to the culprits as “irresponsible fanatics who deserve the gallows,” and committed to bringing them to justice.

The following day, the Tunisian government formally apologized to the Jewish population. Within days, 54 demonstrators – all young men under the age of 30 -- were arrested, and both the national police chief and the interior minister were relieved of their responsibilities. In a trial held at the end of July, all of the defendants were found guilty, and sentenced to prison terms up to 20 years.

Despite the statements and  measures, which included repair of the damaged properties and compensation, the country’s Jews took the hint and began departing in large numbers. If in mid-1967, Tunisia’s Jews numbered 23,000, within a year, no more than 8,000 remained in the country.

"Unlike other Arab and Muslim states, which effectively expelled their Jews in the period surrounding Israel’s establishment, Tunisia went to some lengths to keep its Jews from leaving"

Since Tunisia became independent in 1956, eight years after Israeli independence, it could not do much against the Jews for the 8 years after 1948 while the French were still there.

Post colonial Tunisian government tried hard to play it safe by showing openness toward non-muslim population and advocating democratic principles for all citizens. However, the constitution (as in all post colonial North-African countries) clearly states that Islam is the official religion, therefore making by default non-muslims as second class citizens. The un-official kind (hidden) dhimmitude.

That's the crux of the problem in all these countries (back then and even right now). AND IT WILL NEVER CHANGE... They (officials and the masses included) cannot for one second think of universal principles of citizenship where religious creeds and ethnicities take second stage. Islam has to be dominant no matter what. And with it the whimsical flares of pogroms and anti-Jewish riots and propaganda whenever a precipitating factor emerges. That's the main reason why Jews packed their bags and left (case of Tunisia),in others like Algeria, Libya and Egypt, Jews were told to leave under duress and threat. In Morocco's case, Israel and the Alliance Universelle had to pay huge amount of money to each person (paid in cash and in Swiss banks account of major players of the late Kind Hassan II's cronies and entourage in the 1960's).

I cannot buy the fact that governments went to some lengths to keep their Jews from leaving.

Sammish, in this context of states that identify as Muslim states we have to think of the Cairo Declaration of Human Rights in Islam. As you indicate, Islam does not believe in human rights and the Cairo document uses euphemistic and convoluted language to imply that only Muslims have rights without explicitly saying so.