Jews reach out to Muslims for Ramadan (updated)

Update: Not all Jews reaching out to Muslims have been welcomed: Israelis driving to Ramallah for an Iftar meal were greeted with rocks and firebombs, then ejected by the Palestinian Police.


Jews  have been reaching out to their Muslim neighbours during the month of Ramadan, taking part in Iftar (the evening meal concluding a day's fasting) and visiting them. In Morocco, Jews, Christians and Muslims have been distributing food to needy families, Chabad.org reports. 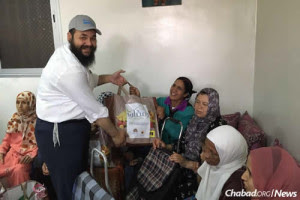 A total of 1, 500 boxes of food, worth approximately $60,000, were delivered to 8,000 Muslim families in three cities. The care packages contained traditional staples — such as tea, dates, lentils and chickpeas — for breaking the Ramadan fast each evening.

The endeavor was organized by the non-profit organization International Fellowship of Christians and Jews (IFCJ), in partnership with the Chabad-Lubavitch of Morocco and the Mimouna Association, a local group of Moroccan Muslim students who work to create ties between Jews and Muslims.

“We are privileged to help support Moroccans in need celebrate the holy month of Ramadan,” Rabbi Yechiel Eckstein, the founder and president of IFCJ, said in a statement. “This inspiring joint initiative serves as a shining model of bridge-building between Christians, Jews and Muslims, and shows that the world’s faith communities can unite around shared values to make a difference for good.”

Edwin Shuker (centre, in the dark suit and blue tie), a member of the British Board of Deputies, at an Iftar celebration in Kurdistan.