Iranian Jews, at home and in exile

Farideh Goldin has written a new book based on her father's writings. He was a Persian Jew who stayed in Iran, while she took the road to exile in the US. The Times of Israel interviews her (with thanks: Lily): 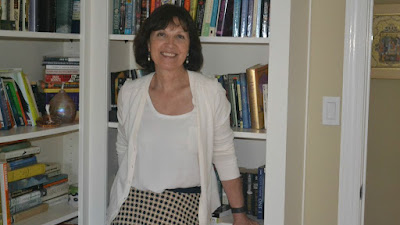 Persian Jew Farideh Goldin (pictured) promised herself she wouldn’t write any more books after her first memoir was published in 2003. But she’s recently released “Leaving Iran: Between Exile and Migration” (AU Press), an account of both her and her father’s lives preceding the 1979 Islamic Revolution and its aftermath.

During his final trip to the United States in 2006, her father, Esghel Dayanim, gave her a suitcase filled with his writings about life in exile.
“I had promised him I would tell his story,” she says. “It took 10 years to write… It was difficult to translate, and very emotionally draining.”

Born in 1953 in Shiraz, Iran, Goldin is the oldest of five siblings. She grew up in the Jewish quarter to a family of dayanim (religious arbitrators) and leaders of the Jewish community and left her family for America at the age of 23, where she has lived since.

Though she hadn’t intended it, the story morphed into a narrative of both their lives.

“In the end, I had no choice but to insert myself to keep the background of the story,” she says. “My father knew what happened in Iran, but he had no idea what was going on in Israel and the US, and so I had to put that in for the history to make sense,” she says.