At a moving commemoration in London on 2 June on the 75th anniversary of the pro-Nazi Farhud, the Israeli ambassador to the UK called on Palestinians to condemn, not revere, their Jew-hating leaders. The pogrom  devastated the Jewish community of Iraq. In its aftermath,  850,000 Jews were ethnically cleansed from Arab countries.
You can see the full video of the commemoration here. 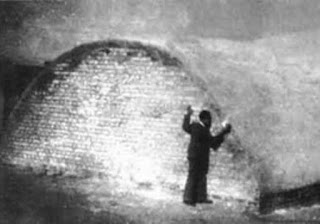 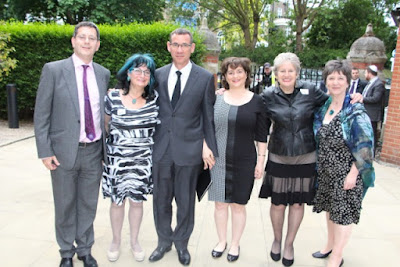 All colour photos: Nizza Fluss.
Top: the mass grave where most of the Farhud victims were buried. Bottom from left: Laurence Julius and Michelle Huberman of Harif, Ambassador Mark and Mrs Regev, Lyn Julius of Harif and Irene Naftalin of SWUs

Addressing 300 people assembled in the Spanish and Portuguese synagogue at Lauderdale Road, the Israeli ambassador to the UK  called on the Palestinian leadership to examine its wartime 'skeletons in the closet'  - and condemn, not revere, their Jew-hating leaders, such as the Palestinian Grand Mufti of Jerusalem, Haj Amin al-Husseini.

Until today, the Mufti is an icon of the Palestinian national movement,  Mark Regev said.

He  was speaking at the 2 June official London Commemoration of the 75th anniversary of a vicious pogrom against the Jews of Iraq, the Farhud. At least 180 Jews were murdered, 1,000 were injured, and much Jewish property destroyed during two days of rioting in June 1941.

Ambassador Regev said that many people believed a mendacious myth : during WWII Europeans killed Europeans, Germans killed Jews, and the price was paid by the Palestinians.

"We refuse to accept those who rewrite history," Ambassador Regev declared. "In those difficult days of WWII, the senior Palestinian leadership was not fighting Nazism, it was not even neutral, it was openly pro-Nazi and supported the Final Solution. If Rommel had broken through at the battleof El-Alamein, the Mufti and his supporters would have been active supporters of the genocide of the Jews," he added.

"There were proud Muslims and Arabs who stood by Jewish people in their hour of need and were not part of this hatred", Mr Regev said, referring to the 'Righteous Gentiles' who saved and sheltered Jews during the Farhud and in Nazi-occupied Tunisia. "But there were all too many people in the Middle East who saw Nazism as something positive, found inspiration in Hitler and adopted a violent antisemitism."

The Grand Mufti stood out as the man behind the propaganda and incitement leading to the Farhud. Days beforehand, the Mufti fled to Berlin and spent the rest of the war urging the Arab masses to join the fight against the Jews.

Speaking at the Commemoration, the US author Edwin Black linked the Farhud to the mass expulsion of 850, 000 Jews from Arab countries as a result of Nazi-style tactics, such as denationalisation and pauperisation. Mr Black, also the driver behind Farhud commemorations in the US and Israel, has been campaigning for the Farhud to be recognised as a Holocaust event. It had been ignored because the Holocaust was seen only to have affected European Jewry. 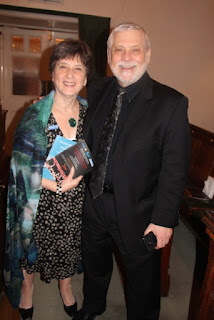 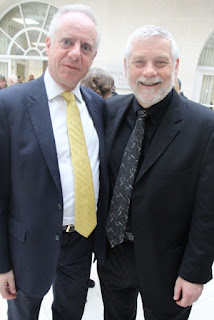 Edwin Black, author of The Farhud, with Irene Naftalin of SWUs (top) and (bottom) with Jonathan Arkush, President of the British Board of Deputies.

The Commemoration, which was organised by Harif (The UK Association of Jews from the Middle East and North Africa) StandWithUS and the Israeli Embassy, featured readings from five books published in English about the Farhud. Yvonne Green read out a poem, which Harif commissioned for the occasion. Joseph Dweck, senior rabbi of the S&P Sephardi Community, sang a prayer for the victims of the Farhud according to the Syrian-Jewish tradition. 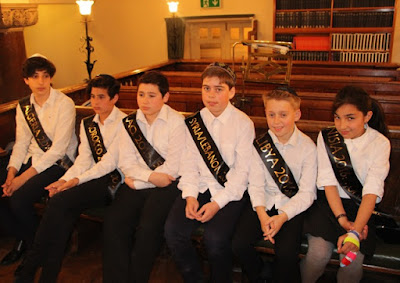 Children wore sashes bearing the numbers of Jews in once-thriving communities and the paltry figures today.

Eight children lit candles to recall the once-thriving Jewish communities in each  Arab countries. The candles were then snuffed out to recall their demise, and a plaintive shofar (ram's horn) was sounded to recall the 27 centuries of the Babylonian Jewish diaspora, now ended.

However, the evening closed on an upbeat note, as a candle lit by Mrs Vered Regev for Israel burned brightly, and Israel's anthem Hatikva was played on the shofar.