This DW article by Judith Neurink casts a spotlight on the 'failed' aliya of  Kurds of Jewish descent in the 1990s. Almost all of these 'Benjews' - most likely descended from Jewish women abducted or forced into marriages with Muslims - returned to Kurdistan. Although the Israeli Law of Return allows an individual with one Jewish grandparent to become a citizen, the status of people who 'feel Jewish' or whose Jewishness goes through the male line remains ambiguous. It puts them in the category of Spanish marranos, Ethiopian Falashmura and other 'lost tribes'. 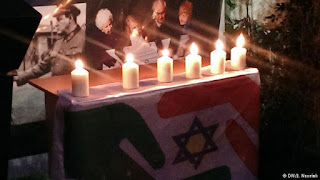 "Israel should accept us," says Sherko Sami Rachamim, a Kurd with Jewish roots, who lives and works in the Kurdistan region of Iraq. For years he has been wanting to settle down with his family in Israel, "but the Israelis closed their doors."

He says that many Jews who converted to Islam like him feel the same. Rachamim is one of thousands of so-called Benjews in Iraqi Kurdistan, whose grandparents converted during the persecution of Jews before and after the founding of the state of Israel. In the 1950s, two thirds of the around 150,000 Jews living in Iraq fled to Israel or elsewhere. Others converted or left during the 1970s when Iraqi dictator Saddam Hussein resumed the persecution.

Although some of the converted Jews became devout Muslims, many are Muslim in name only. Like Rachamim, who shrugs when asked about his faith. "I am not interested in Islam." His wife does not wear a scarf, he did not educate his three children according to Islam either, because he feels Jewish.

"People in [the town of] Koya know me for my criticism about Islam; sometimes friends tell me to shut up for my own safety," he smiles, as if it is a joke. "I consider religion a private thing."

After the Kurdish region gained de facto autonomy from Saddam in 1991, Israel organized two secret operations to evacuate Jews - and children of converts - from Kurdistan. Rachamim's parents were airlifted in one of them.

Their sons visited them in Israel, but found out later that they were not allowed to join them. After 10 months their parents returned to Kurdistan. Even though Rachamim had sold his house in order to move to Israel, he was not accepted. "Because my grandfather and father were Jewish they do not accept us," he told DW. Rachamim finds it hard to swallow that Israel only accepts heritage through the mother's line. His wife's Jewish bloodline also goes through the male line of her father, whose mother converted.

Israeli expert denies there are Jews in Kurdistan
Posted by bataween at Wednesday, June 29, 2016

This isn't really an issue of whether they're Jewish from a male line. Israel's Law of Return specifically excludes converts to other religions.