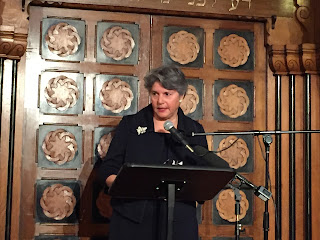 Yvonne Green reads her poem at the Lauderdale Road synagogue commemoration for the Farhud massacre in Baghdad. She later travelled to Jerusalem to read the poem in the Knesset (photo: Laurence Julius).

Harif, the organisation for Jews from Arab lands, turned to verse to commemorate the 75th anniversary of the Farhud, the pogrom in Baghdad in June 1941. It commissioned a poem from London poet Yvonne Green (below), who recited it at a memorial at the Knesset this week, The Jewish Chronicle reports. (You can see the full video of the 2 June commemoration in London and the 6 June Knesset commemorative event here and here*.)


Harif's Lyn Julius said "at these commemorations it is usual to have a witness tell his or her story, but we had very few people in London able or willing to give their testimonies at a public event. We asked Simon Yadoo, a RSC actor of Iraqi-Jewish descent, to read from five works published in English about the Farhud.

"Yvonne's poem complemented the readings perfectly: it encapsulates this cataclysmic event, which sounded the death knell for the Jewish community of Iraq after 27 centuries."


The Jewish News reports: A poem composed to commemorate the 75th anniversary of a massacre of 180 Iraqi Jews was recited in the Knesset this week.

Written by prize winning poet Yvonne Green, it was commissioned by ‘HARIF – the UK Association of Jews from the Middle East and North Africa’, to mark the Farhud; a Nazi-era massacre of Jews in Baghdad.
The poem was read on 2 June at Lauderdale Road Synagogue in London and at the Israeli parliament on Monday 6 June, by Yvonne.


At the event at Lauderdale Road, hosted by Harif,  Israel’s Embassy, and Stand With Us, a candle lighting ceremony took place in addition to the recitation of the poem.
Eight candles were lit to signify the 800, 000 Jews driven from their communities in Arab lands, whilst a shofar was sounded to recall the 27 centuries of Babylonian-Jewish life, which all but came to an end during the 1941 pogrom.
300 people attended the memorial at Lauderdale Road with 400 at the Knesset.
You can read the poem in full here:

We walked on Shabbat
in the Bustan al-Khass
(lettuce orchards)
on the East bank
of The Dijla (The Tigris),
or in al-Saa’doun, built
to look like Hyde Park.

Watch us work, prosper, plod
tread the middle ground during
a two thousand six hundred year
sojourn with family, food, festivals.
Listen to us speak Aramaic, Qiltu,
then Gilit. You never learned
our languages after you arrived,
we wrote literatures preserved
for you now in different geographies.

Watch Britain’s renegade Grand Mufti
translate National Socialism into
his Promised-Land apartheid, listen
to the whispers that the Fuhrer
was born in an Egyptian village.

Watch him and hundreds of Palestinian
and Syrian intellectuals-in-exile train soldiers,
police, militia-men and children, watch
nothing stop the Golden Square Generals,
even once their leaders temporal and spiritual
run away from the British, for whose oil-fuelled
infantry eight kilometers was further than the walk
from Ambassador Cornwallis’ dinner plate
to his card table.
Look, there’s a man in a dark suit at Maqbra,
who’ll later press his cheek and arms up
against a semi-cylindrical grave where
one hundred and eighty Farhud-dead are buried.

This is not the only tomb, they were not the only dead.
But go back before the Omer, watch us
tremble as we asked “Mnein Jitem”
that Erev Pesach after the lawyer,
Rashid al-Gaylani’s coup turned
the hilleq bitter. Watch our hopes surge
when within the month he and the Grand Mufti
escape from the British to Iran, plummet
when Yunis al-Sab’awi declares
himself Governor General and orders us
penned in our homes, soar again when it’s he
who’s deported within the day. Hear us attest
to our treble-terror reprieved when we eat
our Tbit on the Shabbat which runs
into Tikkun Leyl, and hear Regent
Abd al-Illah’s due back the next day,
Sunday June 1st. Watch us cheer him home
on the first day of ‘Eid al Ziyarah.
Then watch soldiers, police, civilians attack us
on al-Khurr bridge, at al-Rusafa, Abu-Sifain
everywhere until 3 a.m. and silence. Watch
at 6 a.m. on the second day of Hag when
they start again. Not just the poor from al-Karkh
who cross the river empty handed,
then load-up having cruelly sacked
our homes, shops, synagogues,
but from everywhere they yelp
“Idhbahu al-Yehud” (butcher the Jews).
Drilled by Salah al-Din as-Sabbagh,
or by centuries of knowing our place,
keeping the rules, paying the price
being no guarantee of protection.
They cut up Jewish babies and threw them
into the undertow, no Moses survived.
They raped girls and old women,
cut their breasts, no Dina survived.
They beheaded and severed, taunted
and tore. Dragged Jews from buses
which they used to run them over.
Every attack intended to humiliate.
The dead, hurt, stolen, destroyed
uncountable, even once the Regent
called in the cut that felled
the saturnine mob. Where was natural,
civil, military, sharia law? The assumed
duty to dhimmi?
In the stand taken by Moslems
like Dr Sa’ib Shawkat, Dean
of Baghdad’s Medical College.
In the acts of landlords
who risked their lives to save those
whose houses the Hitler Youth-styled
Futuwwa had painted with red khamsas.
In the arms of neighbours
who caught children in blankets
when they were thrown to safety
and sheltered families who jumped
across flat roofs where Baghdad
used to spend its summer nights.
Yes, we fought back, we boiled
siraj (sesame oil) and threw it
from our shnashil (latticed balconies)
where women, unseen, had watched
their households’ comings and goings.
We used the bricks from our parapets,
we had no guns, few had iron fists.
Since the funerals our children
remember with new knowledge
and their picnics of beith-bla’ham,
timman-ahmar, and kahi never go south
to al-Kifl for the pilgrimage, sing
Shirit Hagvarim at its seven
waystations, or hear the tomb
of Yehezkel cry for its Jews.

Email ThisBlogThis!Share to TwitterShare to FacebookShare to Pinterest
Labels: Holocaust in Arab and Muslim lands, Jewish refugees/Iraq, Jews of Iraq