As if the uprooting of its Jews were not enough, the Algerian regime is now embarking on a policy of expropriating Jewish cemeteries, the French-Jewish blog JSS reports (with thanks: Nelly). 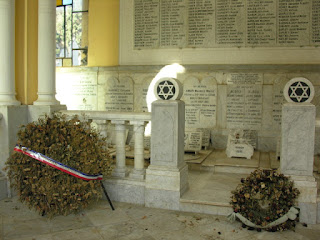 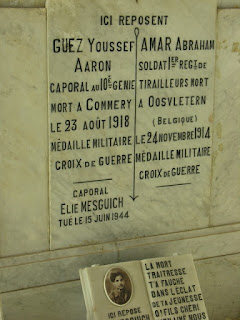 For the last ten years, and with France's approval, the dead are being exhumed and reburied in mass graves. On 26 May 2016, the French foreign ministry  published an obscure announcement  regarding cemeteries in Algiers, Oran and Annaba that are to be amalgamated.

Families who wish to have the remains of their loved ones transferred to France have six months to do so at their own expense. They must notify the French consul-general in Algiers, Annaba or Oran.

However, JSS points out, applicants will be deterred by having to produce documentary proof of the exact location of their relatives' graves. Most Jews will have left with nothing. They might not even recall which cemeteries their antecedents were buried in. The memory of their parents will be destroyed and their bones stuffed into a mass grave without regard for Jewish laws of burial.

The original article gives contact details for the French consul-generals in Algeria. Families can seek general advice by writing to cimetieresalgerie@gmail.com The Muslims of North Africa are almost a text-book illustration of three aphorisms that come close to explaining the general behavioural patterns of most Muslims,regardless of Geographical location,language, ethnicity,skin hue,local culture or political description.

{1}"What's bred in the bone will not quit the flesh."
{2}"Those who believe in absurdities will commit atrocities"...Probably Voltaire
{3} "Those whom the gods would destroy they first drive mad". Probably Euripides

It's not even worth repeating the useless refrain that Jews were in North Africa MORE than 1000 years before Islam showed up. So what! Only direct action is effective in dealing with the followers of Islam. The governing strategy is that they & their proxies and apologists are Roidefs, incurable pursuers, who take their model from Amelek. There's no real subtlety involved. And no more options left to us.
Tactics should be methodically planned according to local conditions. Practical suggestions are available upon request. The only thing lacking among diaspora Jewry is the will to action against highly vulnerable enemies who are winning by default.

Even those who are in the most advanced state of denial about the deep-rooted ineradicable pathology of muslim behavioural patterns, must admit that acts such as these are not extreme, marginal, deviant or particularly unusual by the standards of their perpetrators. Which must include the various dhimmi organizations who routinely aid and abet THEM. e.g. the u.n. most muslim institutions in Europe, the Americas and elsewhere. Desecration of non-muslim, especially Jewish cemeteries and premises are so frequent {like the ritualistic burning of motor vehicles in France. .celebratory behaviour in in in itself} that there can be no doubt of the high incidence of support "les jeunesses" enjoy among THEIR own dysfunctional & burdensome communities. Such patterns of Islamic behaviour go back more than a thousand years and reached a crescendo of bestiality during the Muslim {Moghul} invasion of India in which tens of millions were cheerfully exterminated.
Why should Muslim communities outside the Muslim Orient and THEIR dhimmi accomplices such as almost all United Nations agencies' premises, and THEIR personnel,be spared from,pandered to and protected at taxpayers expense,
from the natural reactions of THEIR victims ? Those "who sewed the wind must reap the whirlwind".