Panel discussion on the 'Jewish Nakba' 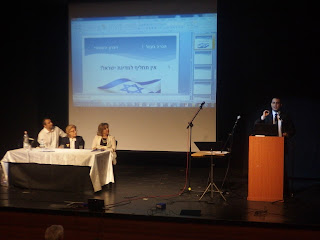 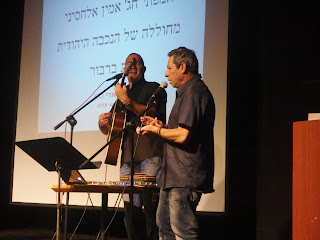 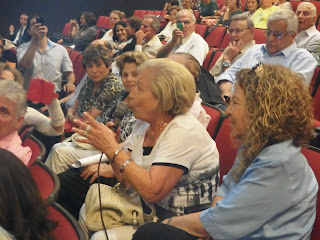 Scenes from the event held on 22 May in south Tel Aviv's Bet Barbour to mark the 'Jewish Nakba'. Organised by Janet Dallal, the event featured talks by Golan Barhoom, Dr Edy Cohen, Levana Zamir and others, witnesses such as Emad Levy who fled Iraq, as well as musical entertainment. It is the second year running that the Jewish Nakba has been commemorated in Israel.

The event occurred shortly after Palestinians marked their Nakba on 15 May.
Gadi Kenny, a peace activist whose interest in Jewish refugees has been ignited by his friendship with Baghdad-born Janet Dallal, asked on his Facebook page  why the Palestinian Nakba was so much better known than the Nakba of 800, 000 + Jewish refugees from Arab lands. Where are the journalists writing about it, where are the films about it? he asked. He urged survivors to record their stories and testimonies on video before it's too late.
Posted by bataween at Wednesday, May 25, 2016

The answer to Gadi Kenny's question on why the dispossession of the Jews of the larger Arab world is not remembered alongside the Palestinian Nakba is twofold in my opinion. First there is the fact that the Mizrahi refugees were absorbed relatively quickly when they fled to places like Israel, Europe, North America, etc while the there are still plenty of Palestinian refugees for numerous reasons covered in this blog.

A second reason I think also deserves mentioning is that the Palestinian Nakba took place in a shorter time span and in a more "dramatic" fashion; a large group of people fleeing conflict and expulsion in wartime. Meanwhile the expulsion of Mizrahi people was more hidden and took place more gradually over the course of years and decades since the Arab-Jewish conflict in Palestine began.

Since these events have occurred, the Palestinian Nakba has been a historical touch stone for both the Palestinians in particular and the larger Arab community in general; a call to arms. Meanwhile the dispossession of the Jews of the larger Arab world and their resettlement in Israel, among other places has been oddly neglected (at least in the western world) until relatively recently. In a way it is now being used as a Zionist counter-narrative to the Palestinian 'Nakba'.

Judeophobes in the West had an interest in overlooking Jews persecuted by Arabs whereas Western policy in the 50s and 60s and up to now has been usually pro-Arab. So the persecution and expulsion of Jews from Arab lands was deliberately overlooked. Whereas in the 1950s, the Jewish communal press in the USA did give attention to these matters, the Israeli govt by the late 1960s and 1970s was overlooking the issue. This was partly out of concern not to spoil "peace prospects" with the Arabs. That is a stupid argument. But a stupid arguments come out of the long-time Israeli ruling parties, Labor and MAPAM [now Meretz].
On Israeli failure to make the argument, I would ask my friend Malka Hillel Shulevitz. She was in the foreign ministry and knew what was going on.