How golden was the Golden Age of Spain?

How golden was the Golden Age in medieval Spain? Is the idea of convivencia - the harmonious age of interfaith cooperation under tolerant Muslim rule - nothing more than wishful thinking?  Rabbi Marc Angel reviews in Jewish Ideas Daily a new myth-busting book by Dario Fernandez-Morera, The Myth of the Andalusian Paradise. 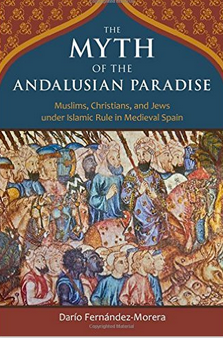 While various scholars have pointed to problems and low points during Islamic rule in Spain, Dr. Fernandez-Morera goes much further. His bold argument is that the notion of Islamic tolerance of Jews and Christians is a myth—it is simply not true. The idea of convivencia—the mutual cooperation and harmony among Muslims, Christians and Jews in Medieval Spain—belongs more to the realm of propaganda than to history.

The author quotes numerous scholars who shower praise on Islamic tolerance, on the remarkable “Golden Age” in interreligious cooperation. But he argues that these authors were engaging in “political correctness,” the fashionable presentation of a tolerant and benevolent Islam. He draws on writings of people who lived in Islamic Spain, people who described what life was actually like in their times. He draws on extensive scholarly sources, on archaeological discoveries, as well as on the abundant secondary literature of more recent scholars.

Dr. Fernandez-Morera notes that the famed Umayyad dynasty were followers of the Maliki school of Islam which had little love for non-Muslims. The early Muslim conquerors of Spain and their successors systematically razed churches or turned them into Mosques. They imposed Islamic law on Christians and Jews—known as People of the Book—which made it very clear that the minorities were to be subservient to Muslims. Although granted relative freedom to conduct their communities according to their own religious traditions, Christians and Jews were “dhimmis”—an underclass of “protected people” who had to pay a special tax for the privilege of living under Islamic hegemony.

Dr. Fernandez-Morera writes: “In short, Islamic Spain enjoyed no harmonious convivencia; rather, Muslims, Christians, and Jews had a precarious coexistence. Members of the three communities had to come into contact now and then. Sometimes they did business, or collaborated with one another, or dwelled near one another.” (p. 117) Of course, as in all societies, kinder people interacted more kindly with those of the other groups. And of course, there are examples of periods of relative quiet. And there were individual Jews and Christians who rose to positions of power and influence. Nonetheless, the massive reality was that “dhimmis” were subject to ongoing humiliation, segregation, and violence.
The “dhimmi” regulations imposed a special tax on Christians and Jews. Various rules were intended to humiliate “dhimmis” and remind them of their subservient positions. Writing about restrictions placed on Jews in Islamic Spain, Dr. Fernandez-Morera notes that Jews “must not ride horses. They must show deference to Muslims. They must not give court evidence against a Muslim…They must not proselytize….They must not dress in such an ostentatious manner as to offend poorer Muslims….” (p. 180)

Professor Fernandez-Morera’s book has a clear point of view. He is especially interested in highlighting the strengths and virtues of Visigothic Spain before the arrival of the Muslims in 711. He praises the Christian re-conquest of Spain. Had it not been for the “Reconquista,” Islamic rule might not only have prevailed over all of Spain, but might have spread further into Europe. This would have led to the fostering of religious discrimination, the low status of women, the inhibiting of intellectual freedom; it would have precluded the emergence of the Renaissance, and would have left the Western world in the same general condition as the rest of the Muslim world.

While some of the arguments of Dr. Fernandez-Morera seem over-stretched and even polemical, the overall impact of his research and his book must make one stop to think more carefully about the “Andalusian Paradise” and convivencia. Are scholars and politicians perpetuating this myth because it serves a useful purpose, because they—and we—want to believe it? How nice it would be to know that there was a time and place when Muslims, Christians and Jews worked side by side in mutual respect and kindness. How nice to think that it is possible for Islamic rule to be tolerant and benevolent.

Read article in full
Posted by bataween at Tuesday, May 24, 2016

The article/book goes a step too far by praising the christian reconquest of Andalusia and claiming the continuation of Al-Andalus in its current form (at the time) would have prevented the renaissance. Are you forgetting the Notorious inquesition campaign again Jews and Muslims? Are you forgetting that the Andalusian oppeness was the catalysit to the renaissance in Dark aged Europe? Without the Arabic knowledge and translation during that era Europe wouldn't have had an enlightenment or renaissance period. They would have stayed in their dark ages and endless inter-christian civil wars. I think the book needs to be more balanced in its argument. These are widely accepted historical facts....sorry to bust your bubble.

The Renaissance started in Italy in the 15th century [quattrocento] and benefitted greatly from the influx of Byzantine Greek scholars after the Ottoman conquest of Byzantium and of Constantinople in 1453. The prosperity of people like the Medicis also allowed them to sponsor and patronize scholars like Giovanni Pico della Mirandola and the converted Sicilian Jew called Flavius Mithridates, like Scaliger and others. Whereas Christians and Jews translated Arabic language intellectual works like the philosophy of Averroes [ibn Rushd], Arab rulers burned the works of the same Averroes.

Also recall the persecution of the Jews in Spain by the Almohades and the Almoravides [al-Muwahadin & al-Murabitun]. That caused Maimonides family to flee Muslim Spain.