It was a busload of visitors like no other. A group of Jews from Arab lands had come to  Ramallah. They came to convince the Palestinian president Mahmoud Abbas (Abu Mazen) to re-start peace talks with the Israeli Prime Minister Benjamin Netanyahu, who gave his consent to the visit. Like interfaith meetings, this one dwelt on the superficial affinities between Sephardi/ Mizrahi Jews and Arabs in language and culture. Elhanan Miller in The Tablet reminds us of what Abbas wrote about Sephardi Israelis - a catalogue of contradictions. At least his writings had acknowledged that the Arab regimes had committed the 'fatal mistake' of expunging their Jews through discriminatory laws. 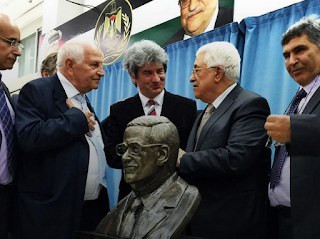 At the back of the bus, Shahar Orgad, a lawyer from Rishon LeZion who helps North African Israelis obtain Spanish and Portuguese citizenships as descendants of those countries, said he was hesitant about coming.

“I belong to the right side of the political map,” he admitted. “Some people call Abu Mazen [Abbas] a mass-murderer, but as [Moshe Dayan] said, ‘Only an ass doesn’t change its mind.’ I wanted to see the other side.”

The visit was facilitated by the World Federation of Moroccan Jewry, an umbrella of 23 organizations, with the help of former Arab Member of Knesset Taleb el-Sana. World Federation chairman Sam Ben Shitrit made clear that the group’s mission was far from just ceremonial, but practical: to convince Abbas to meet Netanyahu and relaunch peace talks. The two leaders have scarcely exchanged words since 2010.

“I wouldn’t have organized this meeting without the consent of Prime Minister [Netanyahu], so I approached him and he said ‘go ahead, give it a try,’” said Ben Shitrit, a Talmud teacher who immigrated to Israel from Marrakesh in 1963. “I’ve made it clear to Abu Mazen and his aides: We are neither right nor left. We are center. Moroccan Jews are well-known for being a model of Jewish-Arab coexistence.”

Abbas clearly gave the group preferential treatment. From on the stage overlooking a delegation of PLO officials in the front row, he patiently listened to long-winded speeches by representatives of Israeli community leaders: The Iraqi, the Egyptian, the Yemenite. He then posed for personal photos with each of the 70 visitors before the backdrop of a mural of the Temple Mount. The crowd was ecstatic as the bus left the compound for a specially cooked kosher dinner at a nearby restaurant, courtesy of the president. Hours later, following two rounds of Palestinian gift-giving, one more round of impassioned speeches, and a communal prayer of Ma’ariv before the baffled eyes of waiters and plain-clothes Palestinian security personnel, the group headed back to Jerusalem.

In his speech, Abbas stressed three times that he had no intention of favoring one segment of Israeli society over another but nevertheless felt a special affinity to the visiting group for reasons of language, culture, and a common history.
“I listen to Israeli musicians every day,” Abbas confided, citing his fondness for the classical Arab singer and Damascus-native Moshe Eliyahu. Reiterating his demand for a halt in settlement construction and making no concrete promise to meet with the Israeli premier, Abbas acknowledged that Netanyahu was indeed Israel’s sole legitimate representative. “I want to make peace with him,” he said.

***
The issue of Sephardi Israelis has long preoccupied Abbas, who considers himself a scholar of Zionist history and an expert on contemporary Israeli society. In his 1977 book The Beginning and End of Zionism, Abbas highlights the antipathy between Ashkenazi Jews—the drivers of the Zionist movement—and the Sepharadim or Mizrahi (Eastern) Jews, who were coaxed into joining it following the creation of Israel.

“The greatest fear of the westerners is of the increase in numbers of the easterners, turning Israel into a Middle Eastern country where the goals of Zionism are abrogated,” he writes. “This fear sometimes reaches the level of a crazy obsession, as some of them ask themselves: ‘Will we all become black within 50 years?’”

As an essentially European colonialist project, Abbas argues, Zionism did not appeal to Sephardi Jews, who were well-integrated into the Arab societies in which they lived. But then Israel was created, and the Arab regimes made the fatal mistake of expunging the Jews from their midst through discriminatory laws and the withdrawal of their citizenship.

“Some previous Arab leaders made a huge mistake—when faced with Zionist activity—and oppressed the Jews of their countries. Another big mistake is that some don’t distinguish between Judaism and Zionism. We must erase the offenses directed at Jews by the enemies of Zionism. We must turn the relationship of enmity which they imposed into friendly relations …
reconstructing the pristine character of Arab association with the Jews, who lived among us for hundreds of years with no sense of discrimination or oppression.”

If things were so good for the Jews under Arab rule, why did they leave en masse? Here Abbas begins to squirm. Zionism was indeed a huge success, he admits, but not a decisive one. In Yemen, Jews preferred to convert to Islam rather than migrate to Israel. In Algeria, Jews favored France over Israel. But it was eventually the maliciousness of Arab regimes like the Iraqi one—that “sent the Jews to the Zionist butcher against their will, under duress”—which allowed Zionism to win over the Sephardim.

“There was nothing natural or logical about their mass migration from Iraq,” Abbas writes on page 50 of his book. “It is untrue that they left because they were Zionists or because they viewed Israel as the embodiment of their aspirations.”

Read article in full
Posted by bataween at Friday, April 08, 2016

here is an article by Ambassador Yoram Ettinger on the issue of Jewish refugees from Arab lands: