A Guardian report, on Israel’s dramatic airlift over the weekend of nineteen of the last 70 or so remaining Jews in Yemen, all but ignores the extremism and antisemitism at the root of the crisis necessitating their rescue, Adam Levick of UK Media Watch reveals. (To be fair, other reports have also made little reference to the antisemitism that has driven Jews away from Yemen. ) 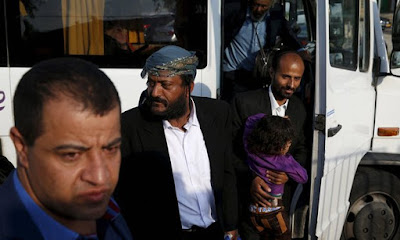 Some of the 19 Yemeni Jews brought to Israel by the Jewish Agency for Israel at an absorption centre in Beersheba. (Photo: Baz Ratner/Reuters)

Similarly, the report, by the paper’s former Jerusalem correspondent Harriet Sherwood (Israel airlifts 19 of last remaining Yemeni Jews, March 22), notes that the Jewish community in Yemen dates back two millennia, and numbered over 55,000 in the middle of the 20th century, but gives no clue as to why their numbers dwindled so dramatically.

Of course, the original Israeli airlifts in 1949 and 1950 were orchestrated in response to the increasingly perilous situation for Yemen’s Jews following antisemitic violence by Muslims. These include riots following the UN Partition Vote in 1947 in which 82 Jews were killed (and hundreds of Jewish homes destroyed) in Aden, and additional deadly attacks on Jewish communities following Israel’s creation in 1948. This omission mirrors the Guardian’s broader pattern of failing to report the state-sanctioned antisemitic attacks and discrimination in Arab countries which resulted in the ethnic cleansing of roughly 850,000 Jews in the region between 1947 and the early 70s.

Additionally, Sherwood (now the Guardian’s religion correspondent) provides little in the way of context to readers about the attacks on Yemen’s remaining Jews by Islamic extremists in the 2000’s to understand the recent airlift.  In addition to several high profile antisemitic attacks and murders, “jihadist gangs” have been harassing Yemen’s Jews, Jewish girls have been abducted and forced to marry Muslims, and all Jews have suffered various systemic social and economic handicaps under sharia law.  (Also ignored by Sherwood: one family that arrived in Israel from Sanaa is related to Aharon Zindani, who was killed in an antisemitic attack in 2012.)

Sherwood also fails to clearly convey that Iranian-backed Islamist (Houthi) rebels, in 2007, forced Jews in Saada to relocate to a secure government compound in Sana’a after threats of violence, including a letter sent to the community which reportedly read: “You should leave the area, or we will kidnap you and slaughter you.”

In short, the Guardian failed to inform readers that the Jewish community in Yemen has almost entirely “relocated” to Israel because endemic antisemitism and Islamic radicalism in the country made continued Jewish life untenable.

Read article in full
Posted by bataween at Tuesday, March 22, 2016

Hopefully, the rest of the Jews in Yemen will be saved from the Houthi menace.