The NGO  Minority Rights Group has just released this report : "Even war discriminates, minorities in exile at home" into the plight of minorities in war-stricken Yemen.  The report, by Rania El-Rajji, slams the 'lack of real engagement on the part of regional and international bodies, such as the UN Security Council, (it) has only exacerbated the dire,  humanitarian and human rights situation." Point of No Return was fortunate to have had an input into the section on the last Jews of Yemen. Here it is in full: 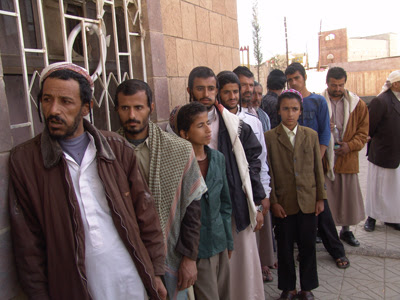 Some of the last Jews in Yemen: threatened and harassed

Following the creation of the state of Israel in 1948, the Middle East’s Jewish communities withered as people eventually left their respective countries, mainly to go to Israel, but also to North and South America, Australia and Europe. While declared personae non grata in a number of Arab countries, in some they remained and tried to fight for their existence. This nevertheless became an increasing struggle. Within ten years, the Jewish population of the Arab world had halved. Those who remained were subject to travel bans in places, and faced the rise of fundamentalism and anti-Jewish sentiment, especially with the repercussions of the various wars between Israel and Arab countries, including the 1967 war.

The Yemeni Jews have had a history of legal and social persecution in Yemen, causing a steady trickle of Jews out of Yemen, often on foot, to Palestine over the centuries. Though treated as social pariahs for much of the nineteenth century, their situation temporarily improved after the Turks recaptured Yemen and abrogated humiliating decrees such as the ‘crown decree’ (30) in 1872. In 1921 Imam Yahya reinstated the ‘orphans decree’, which remained in place until the 1950s. The decree ordered that every dhimmi– including Jewish – orphaned child, would be taken into custody by the authorities and converted to Islam. (31)

The decree is often described as one of the most traumatizing collective experiences of Yemeni Jews.(32) In addition to the impact it had on individuals and families, the decree also posed a threat to the very existence of the Jewish community in Yemen.

In 1947, strikes organized in Aden against the UN’s decision to partition Palestine turned into bloody riots that led to the deaths of 82 Jewish people. (33) Shops were looted,homes and schools burnt. This is thought to have been the main trigger behind the airlift of Yemeni Jews to Israel, beginning in 1949, though many of those who left were also motivated by socio-economic reasons and the desire for a better life. Between 1949 and 1950, an estimated 49,000 (34) Yemeni Jews were airlifted to Israel in a secret operation that was named Operation Magic Carpet, or Wings of Eagles.

Only 3,500 remained. Large waves of migration came to a halt with the 1962 war in the north of Yemen. A travel ban remained in place until 1992. While estimates varied, in 2005, the remaining Jews of Yemen were thought to number between 200 and 500. (35) However, according to some research, between 1,500 and 2,000 Yemeni Jews may have stayed in the country but concealed their religious identity for fear of persecution. (36)

The situation for those who stayed continued to deteriorate in the years that followed. The remaining Jews in Yemen were mostly centred in Saada and in Raida. They lived with limited opportunities and under the predefined social status of dhimmis. This also meant they were considered ‘tribal protégés’, as the tribal system imposed on tribesmen, as a matter of honour, the protection of the‘weak’, which included Yemeni Jews. (37) Incidents of violence against Yemeni Jews nevertheless continued to occur.

In 2008, Moshe Ya’ich Al-Nahare, a Jewish resident of Raida, a city north of Sana’a that retained one of the largest concentrations of Yemeni Jews, was killed by another resident who reportedly shouted ‘Convert or die!’ The court first considered the murderer to be ‘mentally imbalanced’; (38) he was eventually sentenced to death but escaped from prison. During and after the trial, Al-Nahare’s family came under constant pressure from the killer’s tribe to accept blood money in return for sparing his life. Al-Nahare’s family reportedly left the country as a result. (39)

In May 2012, Aharon Zindani, another Yemeni Jew, was reportedly accused of witchcraft and stabbed to death in a market in Sana’a. (40) Saada’s remaining Jews were among thousands of internally displaced persons who left the region from 2006 onwards following the outbreak of conflict in the area. MRG could not obtain any direct testimonies as to the nature of the threats that made them leave Saada; reports widely allege they were targeted with violence or threat of violence, harassment and were at risk of forced conversion by members of the Houthis during the years of the conflict. (41)

A number of Jews from Raida and Saada were offered shelter by former President Saleh in a compound that used to be under government protection, called the ‘touristic city’, in Sana’a. Some have left the country since. While reports differ as to the exact number of Jews remaining in Yemen, our interviewees reported there were presently 83 members of the community, mainly divided between Sana’a and Raida. They keep a low profile, with men tucking away their payots or sidelocks, and practise their religious rituals in the privacy of their homes.

They have been sporadic accounts over the last year of continued threats and violence against members of the Jewish community. Houthi leaders say that their sentiments are against ‘Zionism and the occupation of Palestine’ but that Yemeni Jews should not be afraid.

Information obtained in the course of our research suggests that the stipends that were previously given to Yemeni Jews by the government after their move to Sana have now stopped, leaving them destitute.

For the Jews of Yemen, the future is what they are living right now. The few who remain are facing the burden of war, as all Yemenis are, but also the burden of having no freedoms, no means of subsistence, and living in constant fear of becoming the next scapegoat in many people’s eyes.

Like those who left the country in 1949, the Yemeni Jews forced to flee Saada almost 60 years later had to abandon everything they knew or owned. Today, those who have not gone into exile are living in confinement:

I have stopped wanting to speak. People come and go ... people speak in our name ... we remain with the consequences of their words.... We hold a memory, years of memory, but if words are of silver, silence is of gold today.... Forgive my harsh words, they come from a place of hurt ...’

Excerpts from interviews with a Yemeni Jew living in Sana’a, between September and December 2015.
Posted by bataween at Friday, January 15, 2016